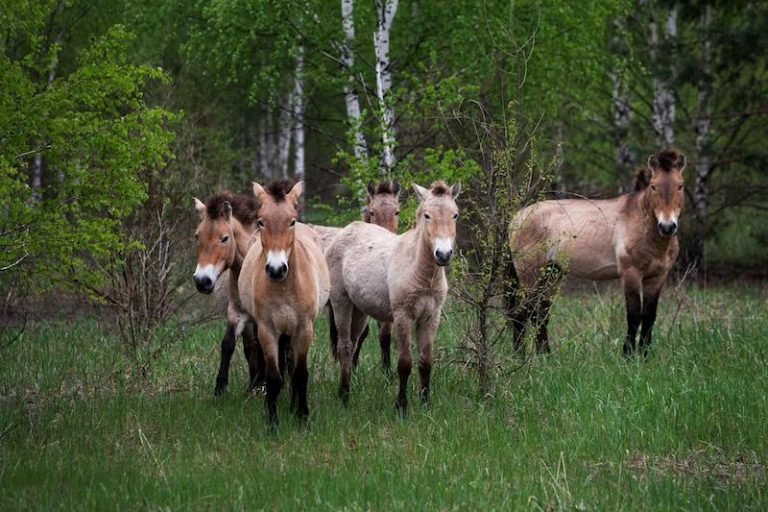 Yes! Life can adapt to radioactivity! And the impact on nature is much less catastrophic than human overpopulation.

CHERNOBYL, UKRAINE – Marina Shkvyria watches for animal tracks as she walks toward an abandoned village in the Chernobyl Exclusion Zone, the area sealed to the public after a nuclear power plant exploded here 30 years ago, on April 26, 1986. Spotting one, she crouches and runs her finger over the toes of a wolf print in the loose sand.

It may seem strange that Chernobyl, an area known for the deadliest nuclear accident in history, could become a refuge for all kinds of animals—from moose, deer, beaver, and owls to more exotic species like brown bear, lynx, and wolves—but that is exactly what Shkvyria and some other scientists think has happened. Without people hunting them or ruining their habitat, the thinking goes, wildlife is thriving despite high radiation levels.

Shkvyria is a wolf expert at the Ukraine’s National Academy of Sciences, and one of a handful of scientists following the fate of Chernobyl’s wildlife. She discovered the wolf pack near the village using unorthodox, but cheap, methods. “We came down here late last spring and howled, and the young wolf pups howled back from the top of that hill,” she says with a mischievous smile.

So far, scientists are divided on how well the animals are really doing in the exclusion zone, which straddles Ukraine and Belarus, says biologist Jim Beasley of the University of Georgia’s Savannah River Ecology Laboratory, who has been studying wolves there with grant support from the National Geographic Society Committee for Research and Exploration.

In a new study released Monday, Beasley says that the population of large mammals on the Belarus side has increased since the disaster. He was shocked by the number of animals he saw there in a five-week survey. Camera traps captured images of a bison, 21 boars, nine badgers, 26 gray wolves, 60 raccoon dogs (an Asian species also called a tanuki), and 10 red foxes. “It’s just incredible. You can’t go anywhere without seeing wolves,” he says. (See a video about wolves taking back Chernobyl.)

Radiation, he argues in the study, is not holding back Chernobyl wildlife populations.