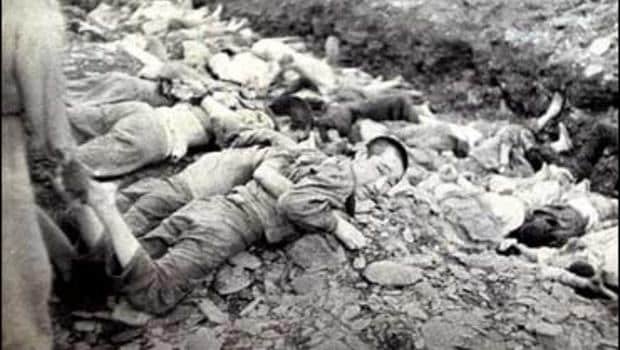 Another crime of the US…

The Associated Press has previously reported on the hidden history of mass executions by South Korea early in the Korean War. The following report looks in-depth at the U.S. connection.
By Associated Press Writers Charles J. Hanley and Jae-Soon Chang.

The American colonel, troubled by what he was hearing, tried to stall at first. But the declassified record shows he finally told his South Korean counterpart it “would be permitted” to machine-gun 3,500 political prisoners, to keep them from joining approaching enemy forces.

In the early days of the Korean War, other American officers observed, photographed and confidentially reported on such wholesale executions by their South Korean ally, a secretive slaughter believed to have killed 100,000 or more leftists and supposed sympathizers, usually without charge or trial, in a few weeks in mid-1950.

Extensive archival research by The Associated Press has found no indication Far East commander Gen. Douglas MacArthur took action to stem the summary mass killing, knowledge of which reached top levels of the Pentagon and State Department in Washington, where it was classified “secret” and filed away.

Now, a half-century later, the South Korean government’s Truth and Reconciliation Commission is investigating what happened in that summer of terror, a political bloodbath largely hidden from history, unlike the communist invaders’ executions of southern rightists, which were widely publicized and denounced at the time.

In the now-declassified record at the U.S. National Archives and other repositories, the Korean investigators will find an ambivalent U.S. attitude in 1950 – at times hands-off, at times disapproving.

“The most important thing is that they did not stop the executions,” historian Jung Byung-joon, a member of the 2-year-old commission, said of the Americans. “They were at the crime scene, and took pictures and wrote reports.”