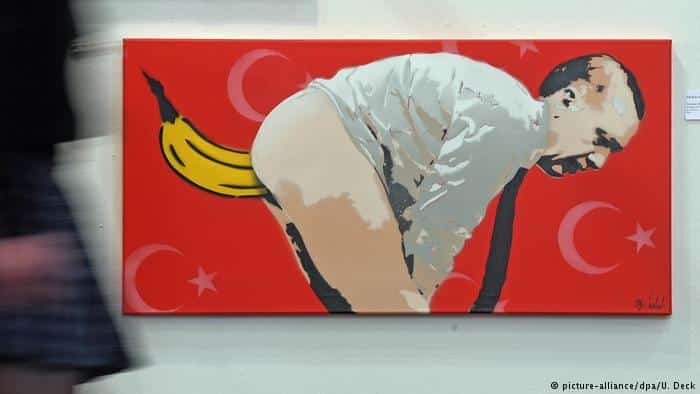 Censorship is back… thankfully the Internet is there…

An art piece featuring Turkish President Recep Tayyip Erdogan with a banana in his buttocks and titled ‘Turkish dictator’ caused a stir at the Art Karlsruhe fair in Germany and was removed from the exhibition.

Gallerist Michael Oess said he took down the provocative painting by Thomas Baumgaertel, a prominent Cologne-based graffiti artist known for his signature spray-painted bananas, “to avoid trouble.” The piece is part of the ‘Despots Series – Trump, Kim and Erdogan.’

“I have a certain responsibility toward other visitors,” he told German news agency DPA. A Turkish journalist had complained about the picture on Thursday, and later used his cell phone to broadcast live video footage from the public display, according to Oess.

A couple of women also allegedly voiced their unease about “desecrating” the Turkish flag, which was in the background of the artwork. But the gallerist shrugged it off as “a staged event” and claimed the females were “agents.” The painting was later sold for €5,900 ($7,200), he said.

Baumgartel, aka the Banana Sprayer, was outraged over the decision to have the piece removed, even “without him being informed” and tweeted that he severed ties with the gallery after the incident.

“It just can’t be true that everyone is tucking their tails between their legs as the populists destroy artistic freedom and freedom of expression” the artist told DPA. The fair organizers said it was not their decision, but that of the gallery owner, “to take down the caricature.”

The Turkish newspaper Daily Sabah reported on the “so-called painting,” saying that to Turks it constituted a “racist and vulgar attack” on their president, Erdogan. Around three million Turkish people live in Germany.

In 2016, Erdogan submitted a criminal complaint against German comedian and TV host Jan Boehmermann, author of a satirical poem about the Turkish president, aired on Boehmermann’s ZDF Neo Royale program.

The “Defamatory Poem,” which featured sexual references, accused Erdogan of repressing Turkey’s national and religious minorities – Kurds and Christians. Turkish Deputy Prime Minister Numan Kurtulmus claimed back then that the comedian’s poem insulted all 78 million Turks, labeling it a “serious crime against humanity.” Ankara demanded the comedian be prosecuted for insulting a foreign head of state.

The German government later granted a Turkish request to allow the prosecution of Boehmermann. Chancellor Angela Merkel herself greenlighted the proceedings for which she received strong condemnation from German politicians and journalists, who said she was compromising freedom of speech. The case was later dropped.