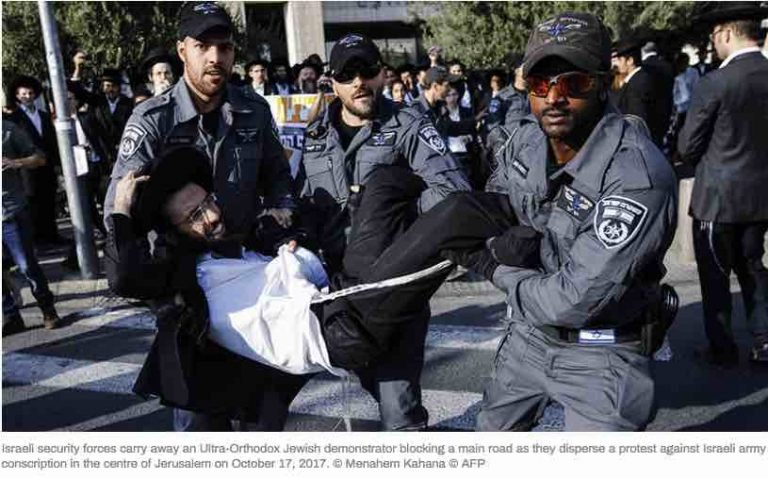 “They believe a Jewish state is not allowed before the Messiah arrives” … and they are 100% right! And the Messiah will not go to Jerusalem as long as the Zionist racist colonial state exists.

At least 58 protesters have been arrested in Israel as ultra-Orthodox anti-draft demonstrations entered a second day. Police said they were arrested for “blocking roads and causing public disturbances.”
The two days of protests were sparked in response to two ultra-Orthodox students being arrested on Sunday for failing to show up to the Israel Defense Forces draft offices. Forty were arrested on Tuesday, with nearly 60 people arrested in total, the Jerusalem Post reports.

Orthodox Jews studying religious texts at yeshivas (Jewish religious schools) and Arab Israelis are exempt from the compulsory military draft. All other Israelis must serve in the army once they turn 18. Men are required to serve for 32 months, and women must serve for 24 months.

Ultra-Orthodox Jews claiming exemption are required to present themselves to the IDF with a letter from their school, something many choose not to do.

On Monday night, hundreds of ultra-Orthodox Jews protested in the city of Bni Brak outside Tel Aviv. Video footage showed police roughly grabbing protesters in an effort to move them away. The footage showed the demonstrators blocking cars and buses on the road. At one stage they sat on the road, blocking a bus’s path.

Eight people were also arrested in Jerusalem near the International Convention Centre in Jerusalem for blocking the light rail in protest.

Video footage from Monday’s protest showed Nomi Golan, an off-duty soldier, confronting a group of ultra-Orthodox protesters who were blocking the road and shouting at her. She responded by delivering a number of karate-like kicks to move them out of her way.

A police officer was also seen pulling a gun on protesters in Jerusalem. Channel 10 aired the footage showing the officer asking the protesters, “Who wants a bullet?” reported the Jerusalem Post. The incident is under investigation.

“During the riot by members of the ultra-Orthodox community, the officer’s vehicle was surrounded and blocked by a number of protesters who threw rocks at it, began rocking it and shouted at him,” Rosenfeld said. “For his own personal safety, he exited the vehicle and pulled out his gun, which at no time was fired.”

In September, the High Court of Justice struck down a law that exempts ultra-Orthodox Jews engaged in military service from being drafted. The judge said the exemption undermined equality and delayed the decision for a year to allow time for officials to prepare.

A number of ultra-Orthodox political parties are in the ruling coalition and are likely to draft new legislation to overrule the decision, the Times of Israel reports.

Some ultra-Orthodox Jews oppose serving as they believe studying religious texts is as important as military service, while other, more extreme believers do so because they believe a Jewish state is not allowed before the Messiah arrives.

The Orthodox draft exemption is a source of contention for some Israelis who have to serve.