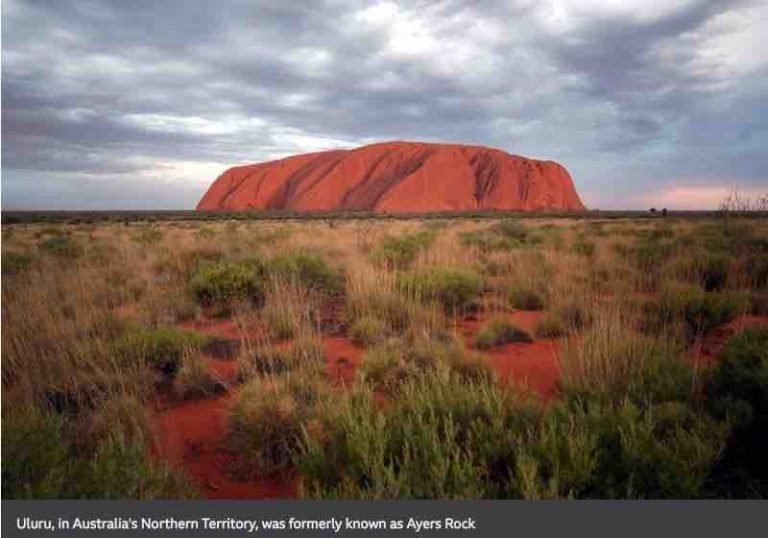 Sorry is not enough! Give them an independent state and a lot of money!

Hundreds of indigenous leaders have gathered in central Australia for a historic summit on formally recognising the country’s first inhabitants.

The three-day summit at Uluru coincides with the 50th anniversary of a vote that allowed indigenous Australians to be included on a national census.

Australia does not mention Aboriginal and Torres Strait Islander peoples in its constitution.

The summit aims to reach consensus on the best method of recognition.

More than 200 delegates from indigenous groups around Australia are attending the First Nations Convention, which will form the basis of a report to be delivered to the nation’s political leaders in June.

The recommendations may result in a referendum to be voted on by all Australians.

It is expected to discuss whether recognition should be included in the constitution or covered separately.

Alternatives likely to be floated include the possibility of negotiating a treaty, and removing clauses criticised as racist from Australia’s founding document.

Two so-called “race provisions” allow the states to disqualify people on the basis of race from voting, and allow laws to be made based upon a person’s race.

There is broad agreement that recommendations from the summit should be “substantive and practical”.

Prime Minister Malcolm Turnbull and Opposition Leader Bill Shorten “respectfully declined” invitations to the meeting, saying they did not want to influence the outcome.

Mr Turnbull said this week also marked 20 years since a landmark report about Australia’s Stolen Generations, a government policy of assimilation that was in place until the late 1960s.

“Today, we again acknowledge the Stolen Generations – those Aboriginal and Torres Strait Islander children who were forcibly removed from their parents simply because they were Aboriginal. Again we say sorry,” he said on Tuesday.

“We acknowledge that this removal separated you from your families, from your lands and your languages and cultures that for 50,000 years your ancestors had protected and cared for.

We acknowledge the continuing deep personal pain that affects your lives and those of your families.”