Birth of a Nation gets standing ovation in Toronto 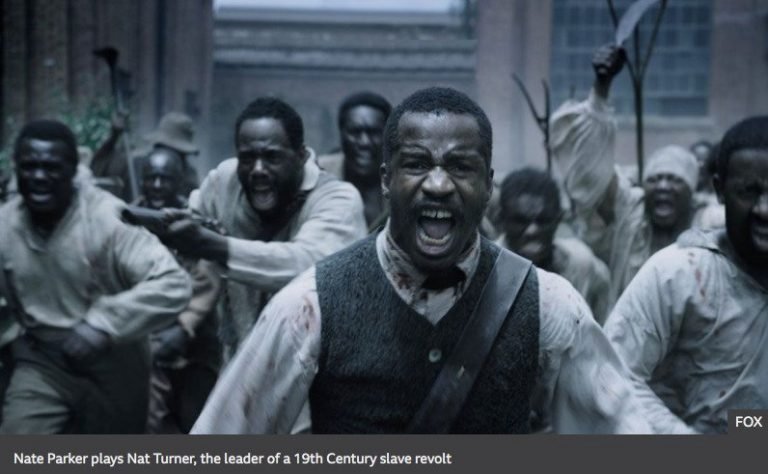 The real story of a real hero against the white enslavement of black people.

Actor and director Nate Parker received an enthusiastic welcome as his film The Birth of a Nation screened at the Toronto International Film Festival.

After a public showing on Friday of the film – based on a slave uprising led by preacher Nat Turner in 1831 – Parker described it as “a labour of love”.

There were gasps in the audience at some of the harrowing scenes.

After the screening, Parker, who has faced media scrutiny over a historic rape trial, got a standing ovation.

Parker acted in, wrote and directed the film. It gained a huge amount of awards buzz when it first screened at the Sundance film festival in January.

However, recent media attention has been focused on Parker’s acquittal for rape in 1999 and his accuser’s subsequent suicide.

‘No brainer’
Parker said: “I didn’t have the benefit of learning about Nat Turner when I was at school, yet I grew up 42 miles (68km) east of where the rebellion happened.

“So you can imagine learning about this person, in the absence of heroes, meant a lot to me.”

He said it was a “no brainer” that he would choose to tell the story on film.

“We should all look at this film in the sense that this was a person that stood against a system that was oppressing people,” he told the audience.

“If we can relate to that in 2016, we must ask our selves what we would be willing to sacrifice for what we want our children, and our children’s children, to enjoy.”

Cameron Bailey, the Toronto festival’s artistic director, described the film as a “painful story from American history and a story that needed to be told”.