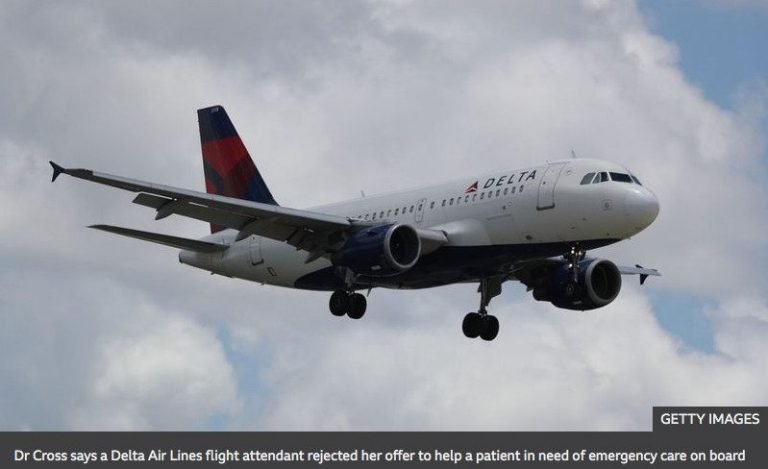 A black doctor was left frustrated after her credentials were questioned when she tried to help a patient on an internal US flight.

Dr Tamika Cross, an obstetrician-gynaecologist, said a Delta Air Lines crew member told her: “Oh no sweetie, put your hand down, we are looking for actual physicians.”

Delta has said it will investigate the incident.

“I’m sure many of my fellow young, corporate America working women of colour can all understand my frustration when I say I’m sick of being disrespected,” wrote Dr Cross, a resident physician at the University of Texas Health Science Centre in Houston.

On a flight from Detroit to Houston, Dr Cross said, a man sitting two rows away from her became unresponsive and needed emergency care.

She said she had tried to offer assistance but a flight attendant, who did not believe she was a doctor, rejected her repeated calls to help the patient.

“I tried to inform her that I was a physician but I was continually cut off by condescending remarks,” she wrote.

“They paged: ‘Any physician on board please press your button.’ I stare at her as I go to press my button.

“She said: ‘Let me see your credentials. What type of doctor are you? Where do you work? Why were you in Detroit?'”

According to Dr Cross, she was eventually passed over for a white male passenger who said he was a doctor.

She ended her post by saying the attendant had later apologised and offered her sky miles – which she refused.

The Artemis Medical Society, an advocacy group for women doctors of colour, has written a letter to the CEO of Delta Air Lines, Ed Bastian, asking him to “investigate and determine if racial and gender bias by crew of Flight 945 led to rejecting the response and offer by Dr Cross to provide emergency medical care to your passenger”.

The New York Daily News quoted a Delta Air Lines spokeswoman as saying: “Discrimination of any kind is never acceptable.

“We’ve been in contact with Dr Cross and one of our senior leaders is reaching out to assure her that we’re completing a full investigation.”