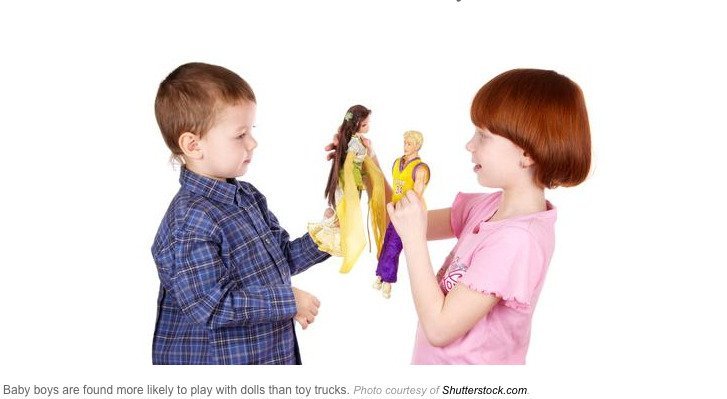 When I was a little child I enjoyed so much my doll! Sleeping every night with her…

“Everyone loves buying dolls for baby girls and cars and trucks for baby boys — it’s simply what we do,” said Dr. Paola Escudero, lead author of the study from the University of Western Sydney MARCS Institute.

Published in the Journal of Experimental Child Psychology, Dr. Escudero and her team of researchers, used pictures of multiple faces and objects to examine sex-related preferences in infants and adults to challenge the innate basis for sex-related preference in object perception. Forty-eight, 4- and 5-month-old infants (24 girls and 24 boys) and 48 young adults (24 women and 24 men) who underwent six trials were recruited for the study.

Through the trials, the participants were shown pictures of male and female humans and dolls, as well as cars and stoves. The participants’ preference for the object was measured using a state-of-the-art eye-tracker, which recorded how long their gaze lingered on the items. The researchers determined the longer the infant was able to hold the gaze, the more likely they are to favor playing with that object.

The findings revealed gender-specific preferences were not present at five months in the group of infants. Baby boys were found to hold a gaze longer with dolls than with cars, suggesting they are more likely to play with objects that have faces. These infants preferred the faces of men and women regardless of whether they were real or doll faces.

“…Using state-of-the-art eye-tracking technology, we found that these gender-specific preferences are not present at five months, indicating that they are the result of physiological changes (e.g., their hormone levels), cognitive development or social pressure,” said Escudero in the news release.

Interestingly, the researchers’ findings have defied the sex-related preferences for toys, as science suggests boys actually prefer dolls over toy trucks or mechanical objects. Dr. Escudero provides evidence for baby boys’ natural connection to dolls and adds to the undefined answer of what causes the gender switch in older children.

Although it is assumed that society subtly nudges boys to play with trucks and girls to choose dolls, hormones are suspected to play an intricate role in this sex-related preference for toys. Previous studies have suggested babies’ exposure to hormones while they are in the womb causes their toy preferences to merge soon after birth without gendered socialization.

In a separate study published in the journal Hormones and Behavior, a team of researchers found toy preferences reflect biologically-determined preferences for specific activities that are facilitated by specific toys. The interactions of 34 rhesus monkeys living within a 135-monkey troop were compared to those of human wheeled toys and plush toys. The male monkeys, like boys, displayed consistent and strong preferences for wheeled toys, while female monkeys, like girls, showed greater variability in preferences. This finding supports the conclusion that toy preferences reflect hormonally influenced behavioral and cognitive biases that are shaped by social processes.

In contrast, the results of Escudero’s study suggest the sex-related preference for toys goes beyond biologically-determined preferences. Her study warrants the need for further research to fill in the gap between five months and three years to determine what triggers boys’ interest in stereotypical male-associated toys.

To break the lines of gender-specific toys, a campaign group Let Toys Be Toys, has urged the largest retailers in the UK to remove gender labels and “organize toys by genre not gender.” Toy manufacturers, like Marks and Spencer, have taken initiative to make all of their toys gender-neutral by 2014, The Independent reports. Gender-neutral presents could limit the possible harm that gender-specific toys could do to the development of a child.

Perhaps in the next holiday season, more boys will have dolls under their tree and more girls will have toy trucks.