Bring on the ‘eviction tidal wave’: 40 percent of US renters face homelessness as landlords and tenants are encouraged to go to war 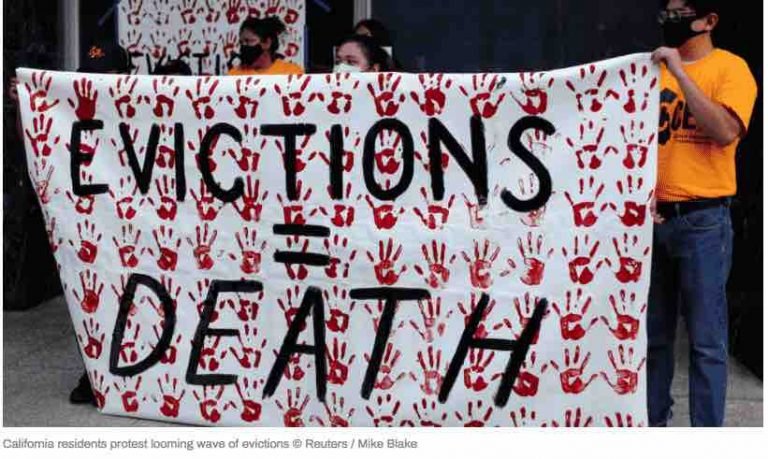 The USA will become a country of homeless people.

Millions of Americans face homelessness with the expiration of the federal Covid-19 eviction ban and unemployment benefits. But instead of encouraging landlord-tenant cooperation, the media are hyping stories of violence and fear.
The economic suffering American families have already faced at the hands of incompetent government responses to the Covid-19 pandemic pales in comparison to the looming “tidal wave of evictions” poised to soak the nation after a federal moratorium expired last month.

Families who thought “moratorium” meant they didn’t have to pay those three months’ rent are getting a rude awakening, learning they’re on the hook for the entire sum just as the $600 weekly unemployment payments many received after virus-related lay-offs have also dried up. A financial bottomless pit is about to swallow millions.

Those hoping to remain sheltered could negotiate with their landlord, given that small landowners – those with just a few buildings – are likely to be just as worried about the end of the moratorium as their tenants.

A few missed rent payments translate to building owners missing their mortgage payments and the bank – or some rapacious private equity firm – taking away their property. They’re likely to be eager to make a deal to get some payment rather than evict a tenant and get nothing at all.

But the media establishment would apparently rather see these two groups at each other’s throats – literally – than working together. Last week, a Connecticut man supposedly used a samurai sword to decapitate his landlord after a rent dispute, a somewhat dodgy story which nevertheless received extensive media coverage – and no doubt succeeded in striking fear into the hearts of building owners already jittery about their futures in post-pandemic America.

The newly-headless landlord, retired insurance exec and semi-famous bridge player Victor King, supposedly ran to Hartford police the day before his death to report tenant Jerry David Thompson had waved the sword at him threateningly when he tried to collect rent.

The next day, King was found decapitated in his home, where investigators went just hours after the man’s friends said they couldn’t reach him – although cops typically tell worried friends to wait as long as 24 hours before filing missing person reports if the missing individual is an adult.

Thompson, identified as a suspect by these same watchful friends, was quickly arrested – only to refuse to say anything to investigators, supposedly claiming he was a “sovereign citizen” and not subject to US law.

With a continuation of either the moratorium or unemployment benefits snarled in Congress for the foreseeable future, the only legal barrier left to stop as many as 40 percent of US renters from being turned out into the streets is a 30-day waiting period mandated by the original CARES Act coronavirus bailout.