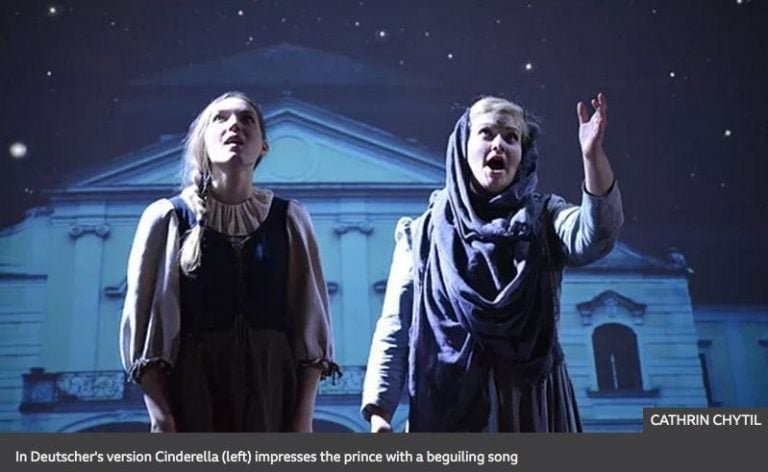 Instead of going to concerts playing Mozart or Bach who are dead a long time ago, people who pretend to love music should go to concerts of composers who are alive NOW! Same for any art: painters, sculptors, etc… This cult of the past and dead artists is criminal as it is killing real art, which is an art by people ALIVE now. These false “culture lovers” who only love art from past artists but let contemporary artists starve to death are not art lovers but just tradition keepers. The real culture is ALIVE and not in museums, which are art cemeteries. I never go to museums but I love going to living artists’ workplaces. If I have to choose between a Mozart concert and a concert by a composer alive now, I will not hesitate one second. Live in the NOW!

An audience in Vienna has given a standing ovation to 11-year-old British composer Alma Deutscher at the premiere of her opera Cinderella.

The girl, who says she gets musical inspiration while skipping, “seemed very thrilled with it all”, her PR manager Judy Grahame told the BBC.

Deutscher reimagined the tale of Cinderella, setting it in an opera house run by the wicked stepmother.

The German-language opera was staged at Vienna’s Casino Baumgarten theatre.

Deutscher, who is homeschooled in Dorking, south of London, participated in the performance.

She played musical interludes on the piano and at one point accompanied Cinderella on the violin.

Some have compared the girl’s musical talent with that of Vienna’s most famous child prodigy, Wolfgang Amadeus Mozart, who thrilled Europe with his operas and instrumental works in the late 18th Century.

German media describe her as a “Wunderkind”.

Deutscher told BBC Radio 4’s Today programme that “quite a few of my melodies and themes for this opera came while I was skipping”.

“I take my skipping rope to the rehearsals and skip with it in the breaks,” she said.

When asked about her creativity, Deutscher said: “I don’t go to school, I learn at home, I’m home-schooled. I read lots of books, I love reading… I read biographies about scientists and composers.”

There was no giant pumpkin in her opera, nor did the prince find Cinderella’s lost shoe, like in more famous versions of the tale.