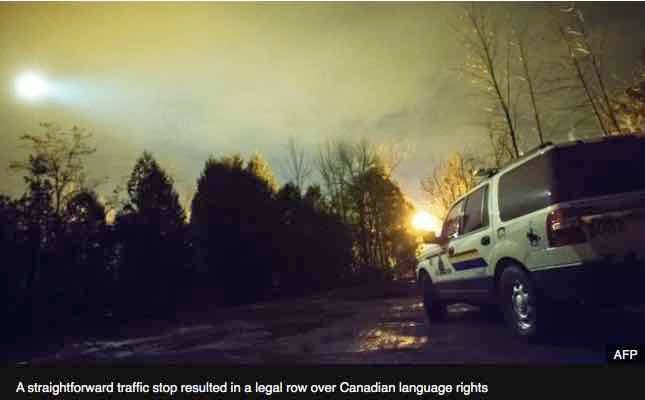 A Canadian driver has been told that a speeding ticket against him has been cancelled because the police officer involved only addressed him in English.

Lawyer Antoine Hacault, whose first language is French, was due to face a judge next week over an alleged speeding infraction in the largely French-speaking village of St-Pierre-Jolys in southern Manitoba, broadcaster CBC reports.

Mr Hacault claims that under Canada’s Charter of Rights and Freedoms and the Official Languages Act, police are obliged to offer their services in French, in areas – such as St-Pierre-Jolys – that are officially designated bilingual.

The officer involved did not speak to him in French, and also wrote out the speeding ticket in English, he says.

Now the courts have agreed with him, the Winnipeg Free Press reports. Mr Hacault has received an email informing him that since his language rights were not respected, the matter is being dropped.

“You expect law enforcement to be aware of their charter obligations and to obey the law – especially the charter, it’s the most important law in Canada,” Mr Hacault told the paper.

Mona Fallis, mayor of St-Pierre-Jolys, says that the local detachment of the Royal Canadian Mounted Police are all bilingual, but sometimes they need to draft in officers from other areas to cover staff shortages.

It was found that the officer in the speeding case was one such officer, transferred temporarily from this usual English-speaking community, an earlier CBC report said.

Canada’s Official Languages Act (Or the Loi sur les langues officielles) came into force in 1969 and gives both English and French languages equal status in the country.

The Charter of Rights and Freedoms was enacted in 1982, guaranteeing political and civil rights to all people living in Canada as a cornerstone of national identity. It also recognises that Canadians speak other languages, such as members of indigenous communities.