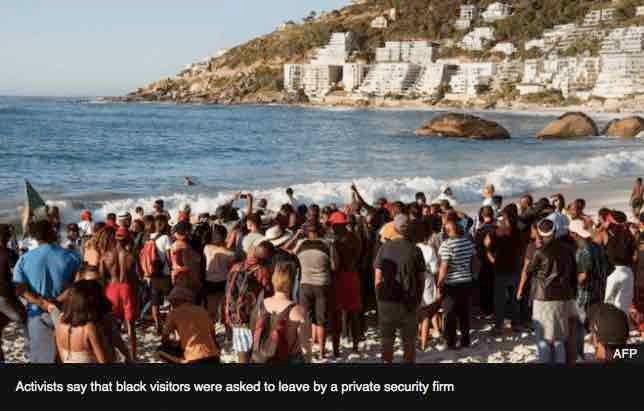 All descendants of European colonialists who invaded African countries should be expelled and their belonging seized without compensation. Then they can apply for a visa if they wish to come back.

Protesters have taken to one of Cape Town’s most picturesque beaches after private security guards were accused of ordering black visitors to leave.

Demonstrators say black beachgoers were unfairly targeted, but the firm denies closing the beach and says it only acts to protect residents from crime.

Beaches and other public areas were segregated during the apartheid era.

Cape Town Mayor Dan Plato said that the security firm “had no authority to ask anyone to leave Clifton beach”.

“We will not allow any private organisations to limit access to our public spaces,” he said in a statement.

Mayor Plato said that the guards had “asked people of all races to leave” and had not targeted black people specifically.

Demonstrators, who converged on the beach on Friday evening, disputed this assertion.

“These private security guards… are actually briefed to not allow black people who appear to look like they are from the townships on to the beach,” local activist Chumani Maxwele told the News 24 website.

Mr Maxwele, who instigated a social media protest under the hashtag #ReclaimClifton, oversaw the slaughter of a sheep in a ritual that protesters said would cleanse the beach of racism.

A small number of animal rights activists protested against the act.

Alwyn Landman, chief executive of the PPA security firm, whose job he said was to protect residents from criminal activity, denied that the company had closed the beach at all.

He told News 24 that police had cleared the area after a crime had been committed.

“It was absolute mayhem and [the police] were really doing a great job to stabilise the situation,” he said.

However, the police said they had not received any reports of criminal activity on the beach on Sunday evening.