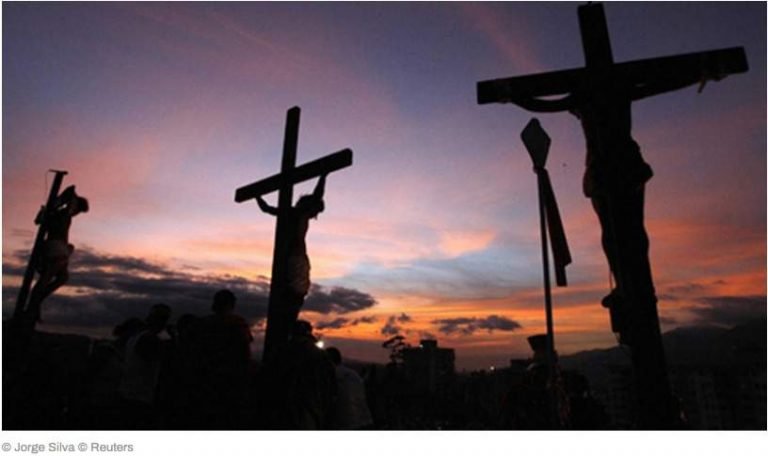 Of course, all bloody crucifix should be removed from all public places! And remember: Jesus DO NOT LIKE THE CROSS! The symbol used by Christian at the time of Jesus was the fishes. So if you really love Jesus: burn your cross!

A prestigious UK university has introduced ‘trigger warnings’ into its theology course over fears students may be distressed when studying the crucifixion of Jesus.

The University of Glasgow introduced the warnings for students taking a class called Creation to Apocalypse: Introduction to the Bible (Level 1).

Popular in US educational institutions, trigger warnings were introduced to warn people about content which may ‘trigger’ a post-traumatic stress reaction.

However, critics argue they have gone too far and are at risk of making university undergraduates overly sensitive or restricting freedom of speech.

The Telegraph reports that in one lecture about Jesus, the University of Glasgow warned students it “contains graphic scenes of the crucifixion.”

Students were told such images would be would be flagged up to them beforehand.

The University of Glasgow also gave trigger warnings to veterinary students who work with dead animals and other students who discuss violence and illness.

The trigger warning phenomenon is appearing in educational institutions across the country.

Stirling University, also in Scotland, has warned archaeology students they would be shown an image of a well-preserved archaeological body, in case they found it “a bit gruesome.”

It also told students on its gender studies course: “We cannot anticipate or exclude the possibility that you may encounter material which is triggering [ie, which can trigger a negative reaction] and we urge that you take all necessary precautions to look after yourself in and around the program.”

A spokesman for the University of Glasgow defended the policy.

“We have an absolute duty of care to all of our students and where it is felt course material may cause potential upset or concern warnings may be given,” he told the Telegraph.

Forensic science students at Strathclyde University have been given a “verbal warning at the beginning of some lectures where sensitive images, involving blood patterns, crime scenes and bodies are in the presentation.”

Scottish Tory education spokesperson Liz Smith said: “Universities are meant to be a place of learning where concepts are challenged and tricky subjects debated.

“That will become increasingly difficult if they go too far out their way to ensure everything survives the politically correct test. Some of the examples set out here are patently ridiculous.”