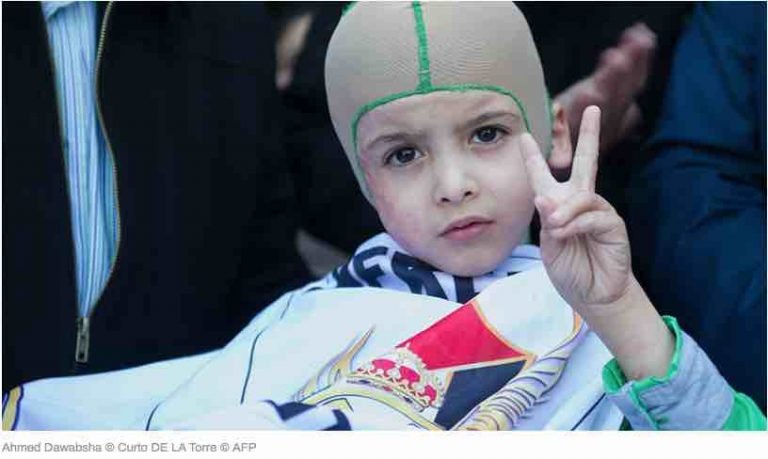 Facebook is blocking the images with the link but we can always find a way by publishing separately… freedom wins… and with their pro-Zionist blocking, they just made the article more visible.

Relatives of an 18-month-old Palestinian toddler who was burned alive along with his parents in an arson attack carried out by an Israeli extremists in 2015 are now suing Israel for “criminal negligence”.

The attack took place in the village of Kafr Duma near the West Bank city of Nablus in July 2015. Settlers set fire to the Dawabsha family home and eighteen-month-old Ali Saad was killed almost instantly while his parents were seriously injured in the blaze and died in hospital months later.

The only surviving member of the family was Ali’s 4-year-old brother, Ahmed. The boy had to undergo months of treatment for serious burns.

Relatives of the Dawabsha family filed a lawsuit against the State of Israel at the Nazareth District Court on Monday.

The decision to file the suit was not about the money, but to hold Israel accountable for the crimes against the Palestinian family, Hassan Khatib, the lawyer representing the family said. The arsonists left inscriptions on the wall, saying “Long live the Messiah” and “Revenge” on the wall of the house, alongside a Star of David.

“This brutal incident led to the worst possible outcome, which also left scars on the soul. The amount of the claim is not the issue,” he said, as cited by the Jerusalem Post. “The full civil and security responsibility lies with the State of Israel.”

Israel created “a hothouse and place for groups of lawbreakers to plan and prepare to carry out hate crimes against the Palestinian residents of the area,” the suit, cited by JP, states, adding that the state of Israel should be held accountable for “criminal negligence” that led to the attack.

“The writing was on the wall and it was clear to everyone that the leniency toward the hilltop youth, outpost residents and lawbreakers would quickly spill over from property damage and non-fatal attacks to deadly attacks that would end the lives of the innocent Palestinian residents,” it said.

“The child Ahmed suffers from disability,” as well as “medical and psychological incapacity from the loss of his father, mother and brother,” he added.

Tawfiq Muhammed from the Gaza-based Al-Mezan Center for Human Rights, told Israeli Channel 2 that “the Dawabsha family lays all the responsibility on the State of Israel for the act of terror in which members of the Dawabsha family were murdered – including the father, mother and son Ali – and also for Ahmed’s injuries.”

“Therefore, we will present a complaint against the state, because we view it as responsible for this act of murder – whether in accordance with international law or the law of the State of Israel,” he said.

In January 2016, Israeli prosecutors indicted four Jewish extremists for various violent crimes against Palestinians, including the deadly arson attack on Dawabsha family. Two people were eventually charged following months of investigation but Palestinians were furious over its slow pace.

Amiram Ben-Uliel, a 21-year-old from Jerusalem, was charged with murder while an unnamed minor was named an accessory. According to Ben-Uliel’s indictment, he decided to carry out the arson attack in retaliation for the shooting dead of an Israeli by a Palestinian a month prior to the attack.

In April this year, Defense Minister Avigdor Lieberman said Ahmed is not entitiled to recompense as a “terror victim” as the law to grant compensation does not apply to Palestinians “who are not citizens or residents of Israel.”