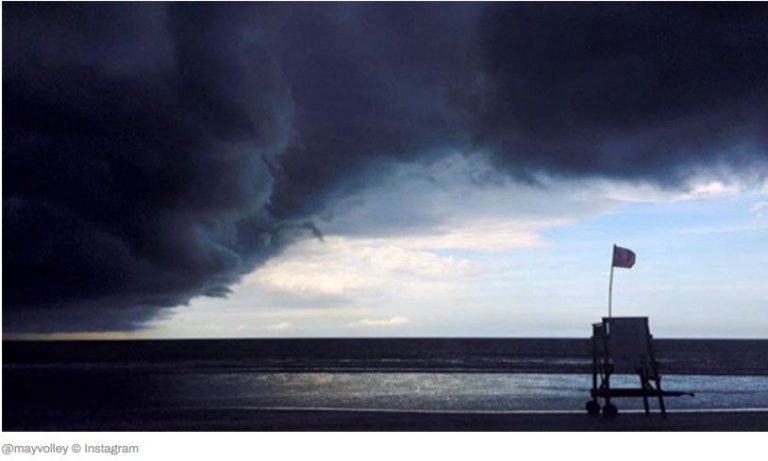 Fantastic! While the sheep follow the orders of the authority and evacuate the area in fear, some enjoy the wind and have fun! The greatest risk in life is to take none!

Surfers tackled giant waves and formidable winds along Florida’s east coast as Hurricane Matthew moved towards the US from the Caribbean, where it killed hundreds in Haiti alone.

Millions of people were evacuated in Florida, Georgia, and North and South Carolina ahead of the storm’s anticipated arrival along the southeastern US coast.

However, on Thursday – the same day Florida governor Rick Scott warned of the storm’s potential devastation – people were seen gathering on the state’s beaches and recklessly pushing their luck to catch one more wave.

In one news report, a fearless kite surfer can be seen being flung meters into the air by a massive gale, before landing back down on a rushing breaker below.

Due to the extremely choppy conditions, the hurricane surf phenomenon has attracted adrenaline junkies to a number of beaches around Florida, including Miami Beach, South Beach, and New Smyrna Beach.

The US Weather Channel has reported waves exceeding 10ft along the east coast.

Images of daredevil hurricane surfing have been shared across numerous social media platforms. One Instagrammer posted a photo of 10 surfers riding the waves in South Point.

“Incredible day of surf with the boys in our own backyard… Now pray everyone is safe and Matthew stays out to sea,” he wrote.

The hurricane has had a particularly devastating effect on Haiti, killing at least 572 people. The storm has since been downgraded from a category 4 to a 3, but winds as strong as 107mph (169kph) battered Florida on Friday.

Hurricane Matthew is forecast to continue traveling northwards up the east coast of the US, but has not made landfall.

The US National Oceanic and Atmospheric Administration (NOAA) issued an extreme weather warning for Florida and Georgia, urging residents to “take cover” immediately.

“Move to a basement or an interior room on the lowest floor of a sturdy building. Avoid windows,” a NOAA statement recommended. “If you are outdoors… move to the closest substantial shelter and protect yourself from flying debris.”