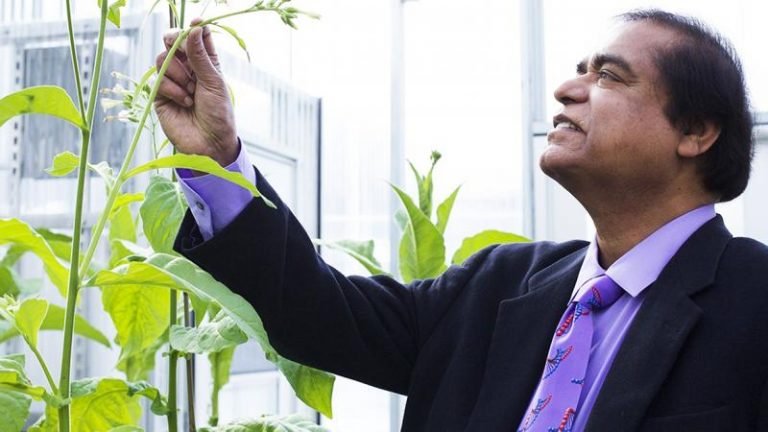 Henry Daniell, a professor in the departments of Biochemistry and Pathology in the University of Pennsylvania’s School of Dental Medicine, has found great success in using genetic engineering to coax lettuce and tobacco plants to produce foreign proteins in their leaves, be they from a polio virus to make vaccines, a wormwood plant to synthesize malaria drugs, or the human clotting factor to make a hemophilia treatment.

Yet over the years, he noticed that while his plant-based drug production platform could efficiently express bacterial genes as well as short human genes, it had trouble expressing viral genes and longer human genes. One explanation for this, Daniell and colleagues hypothesized, could have to do with differences among plants, animals, bacteria, and viruses in how they use the DNA code to make proteins.

“Plant chloroplasts are bacteria-like, or prokaryotic, and humans are eukaryotic,” says Daniell. “So that’s the challenge: How can we make a chloroplast recognize a human gene and transform it like its own to make a protein?”

Proteins are made up of building blocks called amino acids, which are themselves produced according to three-letter strings of DNA called codons. There are 64 codons but only 20 amino acids, because multiple codons encode the same amino acid. But it turns out that different organisms have different preferences for which codon they use to produce a given amino acid.

It was these species-specific preferences that Daniell’s team sought to exploit in a recent paper published in the journal Plant Physiology. The researchers analyzed the genomes of 133 plant species to see which codons were used most frequently to code for particular amino acids. Using their results from this analysis, they designed a software program that converts any given DNA sequence into the sequence that would be preferred by either lettuce or tobacco plants. This software is now freely available for other researchers to use.

Next the team tested whether this process of “codon optimization” resulted in increased levels of protein expression, using a head-to-head comparison of the optimized gene—the output from the software—versus the native gene in two different proteins, one used in a hemophilia therapy and one used in a polio vaccine.

Working with Novo Nordisk, the company that is funding Daniell’s hemophilia research, the research team developed a technique involving a probe to the protein of interest to arrive at an exact quantity in the finished batches.

“These two advances—improving the expression levels of protein and quantifying an exact dose—were key questions the [U.S. Food and Drug Administration] has had about our work,” Daniell says. “Now that we’ve addressed these issues, we’re closer than ever to getting these therapies to the clinic.”