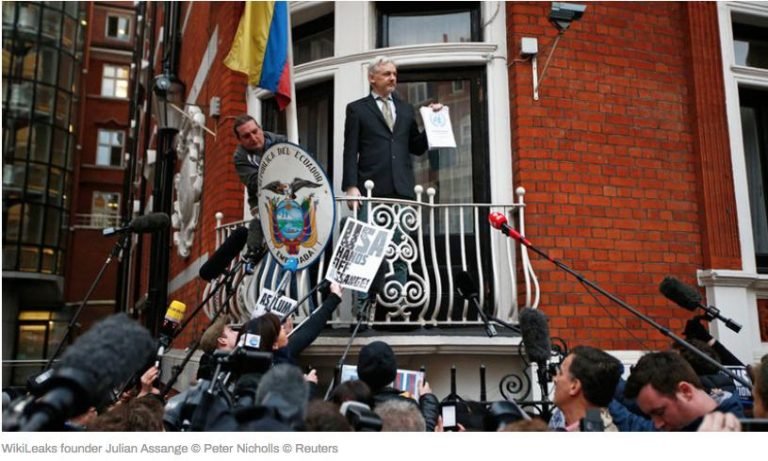 So, if he tries to leave he would be arrested immediately, but to stop an “intruder” it takes two hours for the police to come… It clearly shows for who was working this “intruder”.

Ecuador has criticized British police for their slow response to a call reporting that an unknown man was trying to break into at its London embassy, where WikiLeaks founder Julian Assange has been living for four years.

The Ecuadorian government condemned the “inadequate response” of London police, who it claims arrived two hours after the incident took place.

The delayed response is especially surprising given the huge quantity of resources Britain has poured into surveillance operations outside the embassy since 2012.

Quito released a press statement on Tuesday afternoon in which it confirmed reports that an unidentified man had tried to break into its London embassy in the early hours of Monday morning.

Citing the Vienna Convention on Diplomatic Relations (1961), Ecuador pointed out that the host nation is responsible for the security of embassies.

“The Ecuadorian Government therefore expresses its concern about the inadequate response by the British authorities, who only arrived at the embassy more than two hours after the incident took place.

“The Government of Ecuador regrets that, despite the enormous resources that the British government has undertaken to prevent Julian Assange leaving the Ecuadorian embassy, the authorities did not respond more quickly to this extremely serious attempt an unauthorized entry,” the statement said.

It adding: “The Government of Ecuador expresses its willingness to cooperate with the security forces in the UK to prevent future incidents and renews its commitment to protect Julian Assange.”

WikiLeaks posted a tweet on Tuesday in which it pointed out the Ecuadorian embassy is a mere 2 minutes’ walk from a police station.

The Metropolitan Police ended its 24-hour guard of the Ecuadorian embassy last October, stating it would use “overt and covert tactics” to detain the Australian citizen instead.

Police insist they are still committed to arresting Assange under a European Arrest Warrant (EAW) issued in December of 2010, which seeks Assange’s extradition to Sweden to answer questions about rape allegations.

The WikiLeaks chief has been living at the Ecuadorian Embassy since June of 2012, when he was granted political asylum by the government of Ecuador.

Assange believes if he is deported to Sweden, he will then be sent to America to face espionage charges in for his role in publishing sensitive classified information.