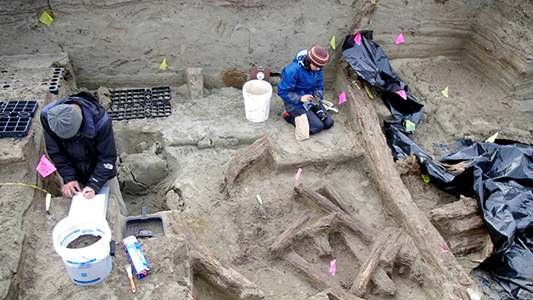 Of course China explored all the world long time before the Europeans, but with a peaceful approach and not as imperialist and colonialist invaders. Think about it: if China had the terrible European mind they could have easily colonized all Asia, Australia, and North America. But they had peaceful minds. And as they invented black powder they could also easily use militaristic advantage much before the European did it. And European dare to talk about the imaginary “yellow peril” while Asian talk rightfully about the ” white catastrophe”. Almost all the world colonized by European people, through numerous genocides and pillages.

Bronze artifacts discovered in a 1,000-year-old house in Alaska suggest trade was occurring between East Asia and the New World centuries before the voyages of Columbus.

Archaeologists found the artifacts at the “Rising Whale” site at Cape Espenberg.

“When you’re looking at the site from a little ways away, it looks like a bowhead [whale] coming to the surface,” said Owen Mason, a research associate at the University of Colorado, who is part of a team excavating the site.

The new discoveries, combined with other finds made over the past 100 years, suggest trade items and ideas were reaching Alaska from East Asian civilizations well before Christopher Columbus arrived in the Caribbean Sea in 1492 archaeologists said. [See Images of the New Discoveries at the Rising Whale Site]

“We’re seeing the interactions, indirect as they are, with these so-called ‘high civilizations’ of China, Korea or Yakutia,” a region in Russia, Mason said.