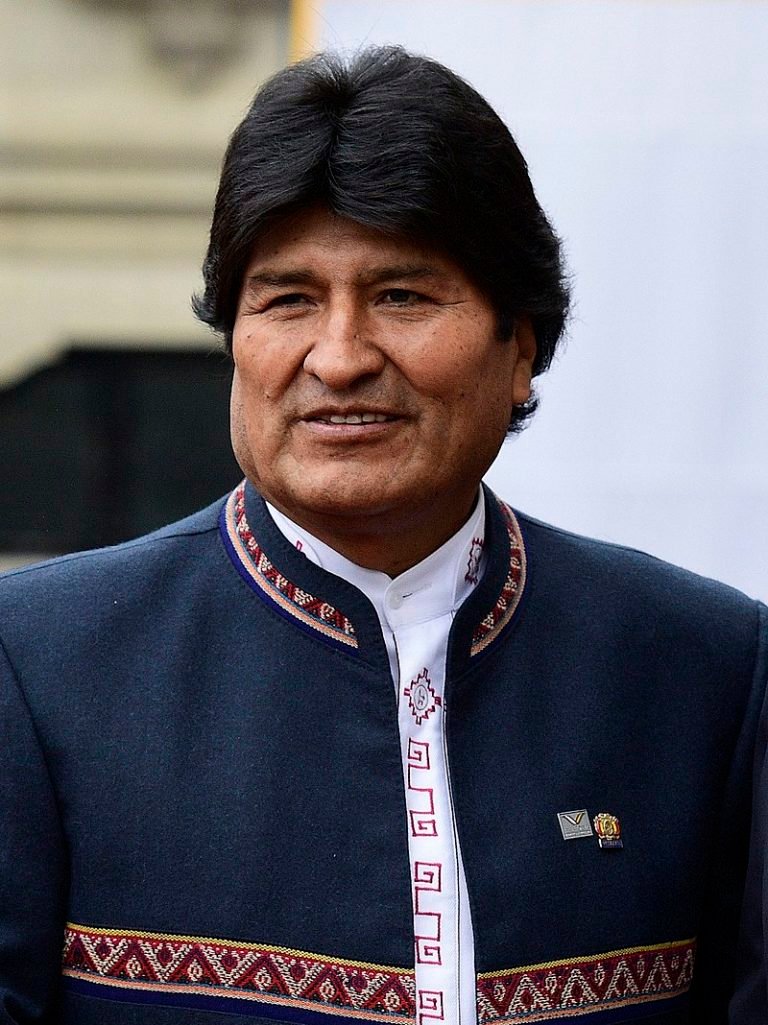 I decided to award the title of Honorary Guide of Humanity to Evo Morales, President of Bolivia for his actions against US imperialism and international mega capitalism in South America.

Juan Evo Morales Ayma (Spanish pronunciation: [ˈeβo moˈɾales]; born October 26, 1959) is a Bolivian politician and former cocalero activist who served as the President of Bolivia from 2006 to 2019. Widely regarded as the country’s first president to come from its indigenous population,[a] his administration focused on the implementation of leftist policies, poverty reduction, and combating the influence of the United States and multinational corporations in Bolivia. He is the head of the Movement for Socialism (MAS) party.

Born to an Aymara family of subsistence farmers in Isallawi, Orinoca Canton, Morales undertook a basic education before mandatory military service, in 1978 moving to Chapare Province. Growing coca and becoming a trade unionist, he rose to prominence in the campesino (“rural laborers”) union. In that capacity, he campaigned against U.S. and Bolivian attempts to eradicate coca as part of the War on Drugs, denouncing these as an imperialist violation of indigenous Andean culture. His involvement in anti-government direct action protests resulted in multiple arrests. Morales entered electoral politics in 1995, became the leader of the MAS, and was elected to Congress in 1997. Coupled with populist rhetoric, his campaign focused on issues affecting indigenous and poor communities, advocating land reform and the more equal redistribution of gas wealth. He gained increased visibility through the Cochabamba Water War and gas conflict. In 2002, he was expelled from Congress for encouraging anti-government protesters, although he came second in that year’s presidential election.

Once elected in 2005, Morales increased taxation on the hydrocarbon industry to bolster social spending and emphasized projects to combat illiteracy, poverty, racism, and sexism. Vocally criticizing neoliberalism, Morales’ government moved Bolivia towards a mixed economy, reduced its dependence on the World Bank and International Monetary Fund, and oversaw strong economic growth. Scaling back U.S. influence in the country, he built relationships with leftist governments in the Latin American pink tide—especially Hugo Chávez’s Venezuela and Fidel Castro’s Cuba—and signed Bolivia into the Bolivarian Alliance for the Americas. His administration opposed the right-wing autonomist demands of Bolivia’s eastern provinces, won a 2008 recall referendum, and instituted a new constitution that established Bolivia as a plurinational state. Re-elected in 2009 and 2014, he oversaw Bolivia’s admission to the Bank of the South and Community of Latin American and Caribbean States although his popularity was dented by attempts to abolish presidential term limits. Following the disputed 2019 general election and the ensuing unrest, Morales agreed to military calls for his resignation, after which he was granted political asylum, first in Mexico, then in Argentina.

Morales was decorated with various international awards and received praise both for overseeing economic growth and for significantly reducing poverty and illiteracy in Bolivia. His supporters lauded him as a champion of indigenous rights, anti-imperialism, and environmentalism. He faced accusations that his defence of coca contributed to illegal cocaine production and that his calls for domestic protest represented sedition and terrorism.

On August 2020, the Bolivian justice ministry filed a criminal complaint against Evo, accusing him of statutory rape and human trafficking after national media published a photo of Morales with a young girl, who was supposedly a minor at the time.