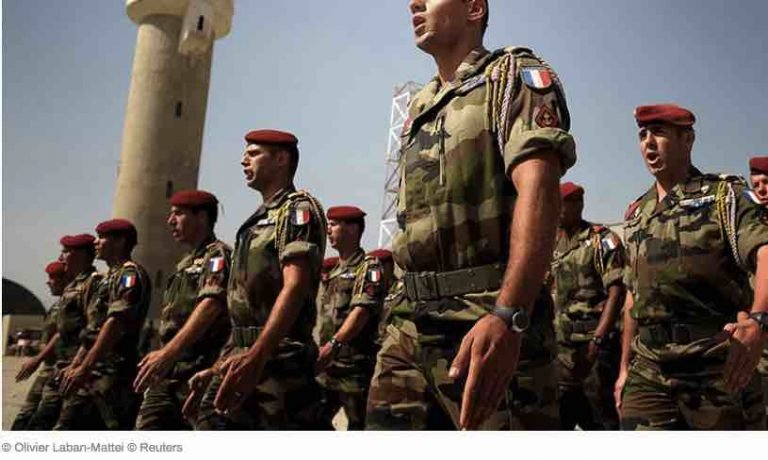 A totally illegal presence of French militaries in a sovereign nation where they are not invited.

A soldier in a French Army special reconnaissance regiment was killed in a “combat-related” incident on Saturday somewhere in the Iraq and Syria warzone, the French government confirmed despite the unit officially not being deployed to either of the countries.

In a statement issued by Élysée Palace on Saturday, French President Emmanuel Macron said that that an “adjutant of the 13th Parachute Dragoon Regiment” was killed while “accomplishing his mission to defend our country, protect our fellow citizens and win the struggle against barbarism.”

Neither the soldier’s identity, nor the exact location or the country where the paratrooper was killed, have been revealed. Former French General Dominique Trinquand, cited by France-24, said it is common for details of special forces missions to be kept secret from the public.

French Defense Minister Florence Parly expressed condolences to the family of the slain soldier, saying that he died “in a battle he led for us all, in the name of freedom and our values,” as cited by Franceinfo.

The serviceman reportedly became the first casualty suffered by the French forces within Opération Chammal, an anti-Islamic State bombing campaign conducted since September 2014 in support of the Iraqi Army and Kurdish militias fighting terrorists on the ground, French military sources told AFP.

In October 2016, it was reported that two French paratroopers from the Task Force Hydra deployed by France to Iraq were injured in a drone explosion near Erbil. The French government later confirmed the injuries. Le Monde reported at the time that the French forces had been engaged in fighting IS for two years alongside Kurdish Peshmerga militia in Erbil.

The French air campaign has been led by Rafale fighter jets, eight of which are stationed in the French airbase in Jordan, some 30 km from the Syrian border, and six in the United Arab Emirates (OAE), according to a report by Le Monde.

But the announcement of the paratrooper’s death is the first public acknowledgement by the French government that the French regiment, based in the southwestern commune of Martignas-sur-Jalle, is on active duty in Syria and Iraq, France-24 reports.

Speaking of the circumstances of the serviceman’s death, Colonel Patrick Steiger, spokesman for the French Armed Forces General Staff, said that the lieutenant was an adviser of a “local force” fighting Islamic State (IS, formerly ISIS, ISIL) which came under heavy fire by jihadists who rained down “weapons of all caliber: machine guns, mortars and missiles” on the group early Saturday. Although the Frenchman was not directly involved in repelling the offensive, he was “fatally wounded” and died on the scene.

Defending the decision to not name the location of the clashes, Steiger said, as cited by AFP, that it was made “so as not to reveal it to the enemy.”

Meanwhile, the US-led Operation Inherent Resolve, of which Chammal is a part, also confirmed the casualty, saying that “a French Coalition service member was killed in a combat-related incident in the Middle East [on] Sept[ember] 23.” The statement went on to note that the French government may decide to reveal more details about the incident.

The regiment traces back its origin to the 17th century and is known to have been involved in the Gulf War and in the Kosovo War, among other engagements.

After the spate of deadly terrorist attacks that rocked France in November 2015, the fight against Islamic State has been listed among the top priorities of the French government.

The Syrian government has repeatedly accused the forces of the international coalition of operating on its territory illegally, as none of its members received the required approval.