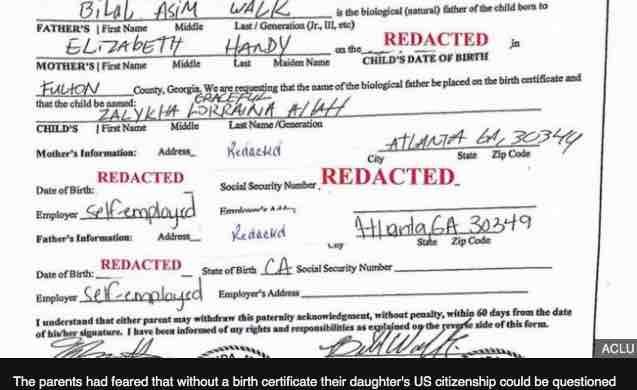 A great victory for freedom lovers. Thank you UCLA!

A couple in the US state of Georgia have won their legal battle to give their baby daughter the surname Allah.

The state had refused to issue a birth certificate for ZalyKha Graceful Lorraina Allah on the grounds that neither parent has that last name.

The American Civil Liberties Union, which brought the case, called the decision a victory for free expression.

But the largest Muslim advocacy group in the US said the surname could be considered offensive.

The Georgia Department of Health had initially said the one-year-old daughter of parents Elizabeth Handy and Bilal Walk should have either of their surnames, or a combination of both.

But the parents said their sons – aged three and 17 – had both been allowed the surname Allah.

Georgia law requires officials to allow any name as long as it is not considered provocative or offensive.

However, the Council on American-Islamic Relations said using Allah as a surname was culturally insensitive.

But he added: “You would never use just Allah. That would be considered very inappropriate.”

“This is an important vindication of parental rights,” said Andrea Young of the American Civil Liberties Union, which helped the parents to sue the state.

“No one wants to live in a world where the government can dictate what you can and cannot name your child,” she added.

The parents, who are expecting their fourth child soon, welcomed the state’s decision, which allows the child to have a social security number, enrol in school and, if necessary, receive government benefits such as food stamps.

In March, the couple told the Atlanta Journal-Constitution that they had chosen the name because it is “noble”, not for religious reasons.