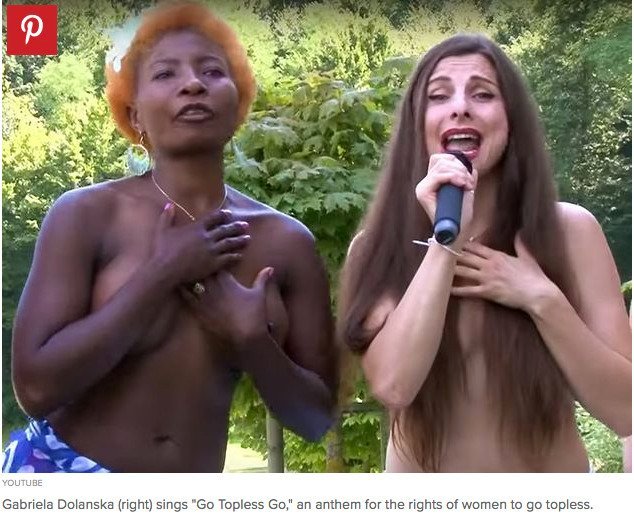 Every important political movement has its theme song.

The Civil Rights movement had “We Shall Overcome,” the 1970s feminist movement had “I Am Woman,” and now there’s a ditty for those who are fighting the good fight to allow women to go topless in public.

Dolanska’s Facebook page states she is located in Slovakia, but she clarified to The Huffington Post that she’s from “infinity.” She’s a member of a UFO cult known as the Raelians, who believe that the human body is the product of advanced genetic engineering from a group of E.T.s known as the Elohim.

Covering up breasts is an insult to the Elohim’s good work, they say.

Anywhosy, a video of the annoyingly catchy song was released earlier this week. It may be NSFW, since it features a group of bare-breasted women.

In case you’re unable to view the video right now, some of the lyrics include:

I was born with a body that was pure and holy/ I love my breasts as I love all the rest.

I shouldn’t have to hide/ It’s up to me to decide. If you don’t like my way/ You can just look away.

“Go Topless Go” was released earlier this week to promote Go Topless Day, which takes place on Sunday. The breast-baring event, organized by the Raelians, is now in its ninth year.

Go Topless Day encourages both women and men to bare their upper bodies in order to protest hypocritical laws that force women to cover their breasts while men can walk around with no shirts.

There are expected to be demonstrations in at least 56 cities around the world, according to GoTopless.org, a website that keeps abreast of this cause.

At some events, women will go topless or wear a “tata top,” a bikini top resembling female breasts. Men are encouraged to show their support by wearing bikini tops.

Of course, not all people who believe women should be able to go topless are part of a UFO cult. The Free The Nipple movement, for instance, has been fighting for equal rights to toplessness ― in public and on social media ― since 2012.