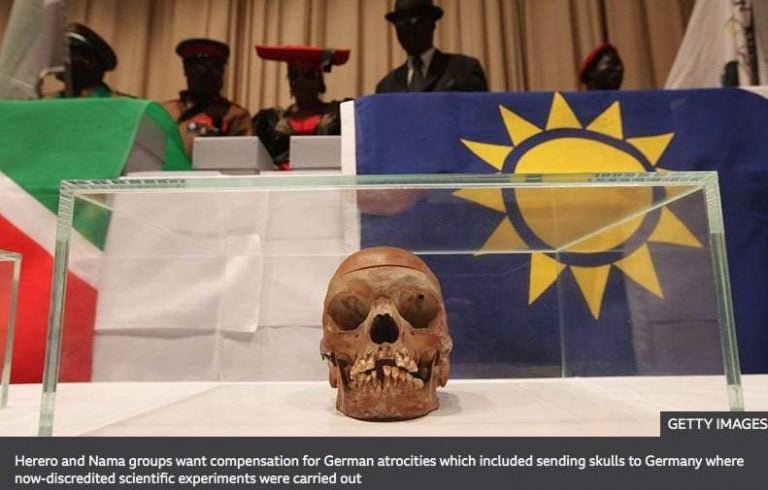 They are absolutely right and all ethnic groups who suffered damages from colonial powers should sue to get reparation.

Representatives of two indigenous groups in Namibia, the Herero and Nama peoples, have filed a class-action lawsuit against Germany in New York.

They are seeking reparations for what former colonial power Germany acknowledges was genocide.

The plaintiffs are seeking reparations and the right to representation at talks between Germany and Namibia.

Some 100,000 people are believed to have been killed when Germany crushed an uprising, beginning in 1904.

Namibia and Germany have been in talks about a joint declaration on the massacres, which Germany has recently admitted were genocide, but Herero and Nama descendants have been excluded from the talks.

Unlike with the victims of World War Two atrocities, Germany has also refused to pay reparations to victims, saying it pays millions of dollars of development aid to the country instead.

The dispute relates to a period in the late 19th and early 20th Century, when Germany was the colonial power in Namibia, then called South West Africa.

The suit claims damages on the basis that, as it states:
– from 1885 to 1903, about a quarter of Herero and Nama lands were taken without compensation by settlers with official oversight – German descendants still farm some of that land today
– colonial authorities ignored rapes of Herero and Nama women and girls as well as indigenous forced labour
– as many as 100,000 Herero and Nama people died after they rebelled in 1904 in a campaign led by Lieutenant General Lothar von Trotha

Studies also suggest that colonial rulers placed captives in concentration camps, and shipped off thousands of heads belonging to the dead to Berlin in an attempt to prove the inferiority of the defeated Africans in now discredited medical experiments.

The plaintiffs say Germany’s insistence it is making amends by paying development aid is unsatisfactory.

“There is no assurance that any of the proposed foreign aid by Germany will actually reach or assist the minority indigenous communities that were directly harmed,” the plaintiffs’ lawyer Ken McCallion said in an email to Reuters news agency.

“There can be no negotiations or settlement about them that is made without them.”

The case was lodged with the US District Court in Manhattan under the Alien Tort Statute, a 1789 law often invoked in human rights cases.