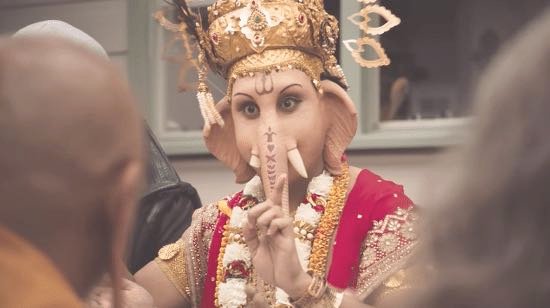 Wonderful! Almost like the meal I had on the Eternal life planet…

As a vegetarian, it feels wrong to get behind this ad for lamb… but as someone who can laugh, it’s pretty damn funny.

The ad, sponsored by Meat and Livestock Australia, features a number of gods at the same dinner table. They’re all eating lamb since it’s the one meat none of them have restrictions against. (Clever.)

Over the course of two minutes, just about everyone becomes the butt of a joke. Aphrodite keeps getting texts about matches from a dating website. Ganesh doesn’t find it funny when someone brings up the “elephant in the room.” Muhammad calls to say he can’t make it (naturally). The person who seems completely out of place happens to be the one person with no religious affiliation. Even Jesus doesn’t escape mockery.

But it’s all in good fun. They all get along. It’s beautiful fiction.

Most people seem to understood the humor, but one group has strongly spoken out against the ad.

A number of Hindu individuals and organizations have called it “irresponsible,” “unacceptable,” and “senseless.” They want the ad removed from television.

“Lord Ganesha was highly revered in Hinduism and he was meant to be worshipped in temples or home shrines and not to be used in selling lamb meat for mercantile greed,” Mr Zed said.…

Mr Zed said trivialization of a deity was disturbing to the Hindus world over.

“Hindus are for free artistic expression and speech as much as anybody else if not more. But faith is something sacred and attempts at trivializing it hurt the followers,” he said in a statement.

To put that another way: We love free speech! Unless you’re mocking us. In which case you have to stop.

Zed also called for the ad to be banned.

No reasonable person would watch this ad and come away thinking, “This is unfair to Hindus.” It has a go at everyone with an overarching message of unity. Sure it’s selling a product, but the people who put this together weren’t trying to single out any one group.

All of the offended voices sound like the Catholic League’s Bill Donohue, who gets 99% of the way to an aneurysm every time people criticize or mock his faith, even when it’s harmless and done with perfectly good intentions.

I would love to hear something like this from a sensible Hindu organization: “We understand why some people may be upset, but we have a sense of humor. We’re glad they included our faith in this ad. And after viewers taste some lamb, we encourage them to visit one of our temples in Australia where we’d love to treat them to dessert.” In other words, be like the Mormon Church advertising in the Playbill for The Book of Mormon musical.

The only people who ought to be outraged are vegetarians. Religious groups should sit back and just enjoy the free publicity.