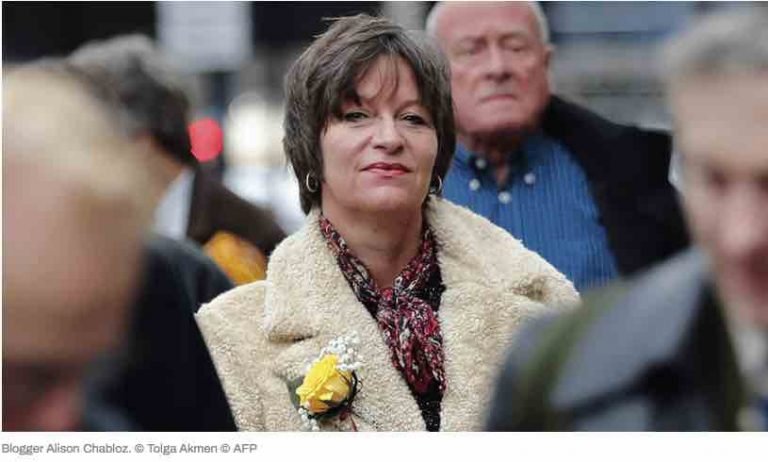 A self-proclaimed ‘Holocaust revisionist’ sang along with one of her anti-Semitic songs as she appeared in court over the “grossly offensive” tunes. The songs had been posted on YouTube.

Alison Chabloz, 53, from Derbyshire, posted a video on her blog in June 2016 containing a song which mocked prominent Jewish figures persecuted by the Nazis, including Nobel Peace Prize winner Elie Wiesel, as well as Anne and Otto Frank.

Chabloz appeared to mouth along to the tune, titled (((Survivors))), as it was played for Westminster Magistrate’s Court on Wednesday.

Some of the lyrics in (((Survivors))) are: “Was it just a bunch of lies? Seems that some intend to pull the wool over our eyes. Eternal wandering liars haven’t got a clue, and when it comes to usury, victim’s always me and you.”

The video features her singing along to another song named ‘Nemo’s Anti-Semitic Universe,’ where she describes Nazi-run concentration camps as “theme park for fools.”

Both songs were sung during the London Forum event held at Grosvenor Hotel in London in September 2016, and uploaded to YouTube days afterwards.

A third song, ‘I Like The Story As It Is,’ describes the Holocaust as a “damn fine tale,” and was uploaded to YouTube in September 2017.

Karen Robinson, prosecuting, said this was “an extraordinarily offensive description of perhaps the most traumatic event in Jewish history.”

She said the songs “are anti-Semitic, targeted at Jewish people as a whole. They use content and tone to ensure offence. The songs are designed to provoke maximum upset and discomfort.”

She added: “By the standards of an open and multi-racial society, they are grossly offensive.”

Chabloz has been charged with five counts of improper use of the public communications network.

Chabloz denies two counts of sending by a public communications network an offensive, indecent or menacing message or material in relation to two of the three songs. She also denies two alternative counts of “causing” offensive material to be sent by a public communications network, after her performance was posted on her blog, as well as a fifth charge in relation to the third song.

The court heard that Chabloz told police she wanted to “entertain my audience, my viewers,” and to put across “my political artistic creative point.”