Homeless man ‘froze to death’ in Birmingham on coldest night 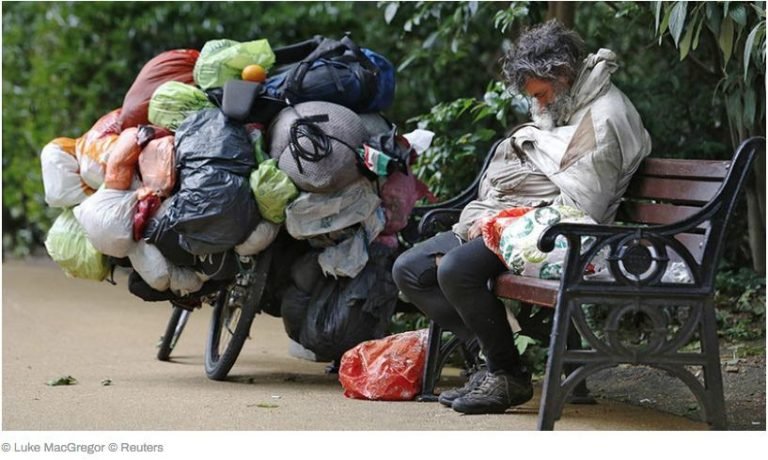 How can the British people tolerate that the Queen receives millions while homeless people are dying of cold in the streets?

A homeless man ‘froze to death’ on the streets of Birmingham just a day before UK charity Shelter warned more than 250,000 people in England will be homeless this Christmas as high rents, benefit cuts, and a worsening housing crisis create the perfect storm.

The body of the unknown man was found in the West Midlands city at 11.30pm GMT on Wednesday, the coldest night of the year.

It is understood the body, found in John Bright Street, is that of a 30-year-old man with no fixed address.

Figures compiled by Shelter reveal that 255,000 people across the country are forced to live in hostels and other types of temporary accommodation, or to sleep rough on the streets.

London has the highest rate of homelessness. As many as one in 25 residents of the central London borough of Westminster are without a home.

Shelter published the figures to mark its 50th anniversary. The charity warned that the number is a conservative estimate.

Des Wilson, one of the charity’s founders, told the BBC the country must come together “with the same combination of anger and compassion with which it supported our work all those years ago.”

Shelter chief executive Campbell Robb said the charity’s “founding shone a light on hidden homelessness in the 1960s slums. But while those troubled times have faded into memory, 50 years on a modern-day housing crisis is tightening its grip on our country.

“Hundreds of thousands of people will face the trauma of waking up homeless this Christmas.

“Decades in the making, this is the tragic result of a nation struggling under the weight of sky-high rents, a lack of affordable homes and cuts to welfare support.”

Shelter says the new figures – obtained by analyzing government data – do not include the “hidden homeless” who have nowhere to live, are refused housing assistance, and end up “sofa surfing” in friends’ homes.

Evictions by private landlords are the biggest single cause of recorded homelessness. Ministry of Justice data revealed last month that more than 100 households are evicted every day in England.

Homelessness hotspots outside of the capital include Luton, Brighton, Birmingham, Bristol, Slough, and Reading.

The Department for Communities and Local Government disputed the figures, claiming homelessness is down on 2003 figures.

“However, we know that one person without a home is one too many,” the department said.

“That is why the government is investing over £500 million ($632 million) during the course of this parliament to tackle homelessness. This includes protecting £315 million for local authority homelessness prevention funding and £149 million for central government funding.”

Local Government Association spokesman Martin Tett told the BBC that councils across England are stretched by funding cuts and struggling to cope with rising homelessness.

“Councils need powers and funding to address the widening gap between incomes and rents, resume their historic role as a major builder of new affordable homes and join up all local services – such as health, justice and skills. This is the only way to deliver our ambition to end homelessness.”