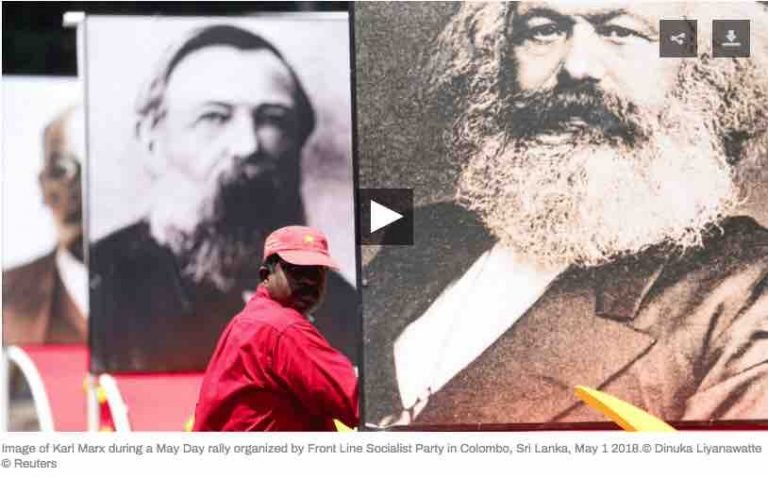 Wonderful! And Marxism without the proletariat is Paradism.

Exactly 200 years after the birth of revolutionary philosopher Karl Marx, his work remains as relevant as ever. As socialism experiences a resurgence, people all over the world are embracing Marxist ideals.
The recent gains in popularity for socialist politicians in the Western world has demonstrated a desire for a shift away from capitalism as we know it. In the US, self-proclaimed socialist Senator Bernie Sanders heralded a socialist revolution during his campaign to be the Democratic presidential candidate, while in the UK the Labour Party made huge gains in last year’s election under proud socialist, leader Jeremy Corbyn.

Meanwhile in Greece, the anti-austerity Syriza party – a radical left-wing coalition which promoted itself on its commitment to Marxism – swept to power in 2015 as the country was in the midst of a debt crisis.

A global survey conducted by Ipsos ahead of Marx’s 200th birthday questioned 20,000 adults in 28 countries on their views regarding various Marxist ideals such as free education, healthcare, and even a right to universal income.

Nine out of 10 people polled think that education in their country should be free of charge, and that free healthcare should be a human right, according to the survey. Russians were most likely to agree on both counts, followed by Serbs.

Regarding the right to unconditional basic income, just over two-thirds of survey respondents supported the measure. Across all 28 countries, nearly eight in 10 think the rich should be taxed more to support the poor – this consensus was highest in Spain, Serbia, and China.

However, two-thirds of people globally were of the view that free market competition brings out the best in people, and nearly 70 percent agreed that it is right for people who are talented to earn more than those who are less gifted.

Citizens from the People’s Republic of China were the most likely to agree with the statement that socialist ideals are of great value for societal progress, followed by people from India and Malaysia. Overall, respondents were split over socialism’s potential today, with half saying it has great value for improving society, and almost as many seeing it as a means of oppression.

China has huge celebrations planned for Marx’s 200th birthday and has even gifted a huge bronze statue of the great thinker to his hometown of Trier in Germany.

The statue has, perhaps unsurprisingly, left the country split – Germany’s eastern half was ruled under the communist Soviet Union from 1949 until reunification in 1990. Adding to the contention, the memorial will be unveiled by President of the European Commission Jean-Claude Juncker. The project has been condemned by the US Congressional Victims of Communism Caucus.

“Marxist regimes are responsible for murdering at least 100 million lives – 65 million in China, over 20 million in the Soviet Union and over two million in North Korea,” the group wrote in a letter urging Juncker to reconsider his appearance, or at least speak out against the “tyranny” committed in the name of Marx. Juncker, in turn, said: “Marx isn’t responsible for all the atrocity his alleged heirs have to answer for.”

Marx continues to be a divisive individual but, despite declarations following the downfall of the Soviet Union that Marxism was dead and buried, his ideology remains relevant around the world.

This lingering influence is particularly evident on May Day, when workers’ unions across the globe take to the streets to demand better labor rights. Karl Marx is frequently invoked at these rallies as activists hold up his image, reminding capitalists that the legacy of the man, often described as the ‘father of communism’, endures today.