‘I don’t give a sh*t about them’: Philippine president threatens to leave ‘stupid’ UN 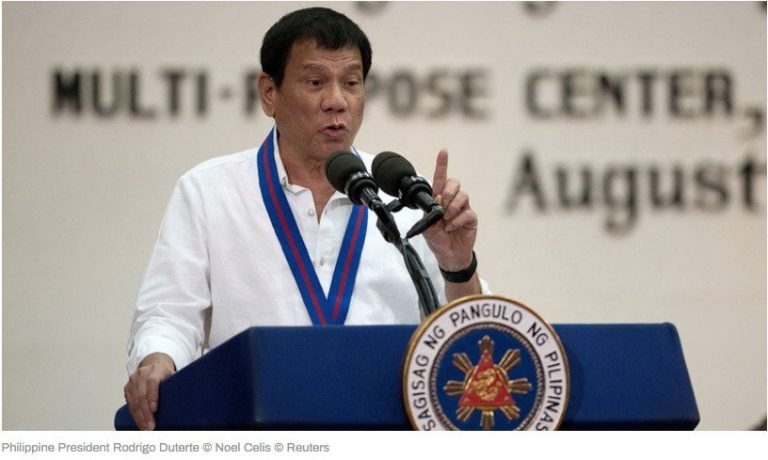 Yes! Finally, a Head of state may trigger the dismantlement of the US puppet United Nations Organization and inviting China, African nations, and other countries to create a rival international body is a wonderful idea! Should be called Anti Imperialism States Organization.

Philippines President Rodrigo Duterte has threatened that the country could leave the UN after the organization urged the Asian nation to stop executing and killing people linked to the drug business and threatened that “state actors” could be punished.

“I do not want to insult you, but maybe we’ll just have to decide to separate from the United Nations,” Rodrigo Duterte told journalists on Sunday. “Why do you have to listen to this stupid?”

I don’t give a sh*t about them,” he added. “They are the ones interfering. You do not just go out and give a sh*tting statement against a country.”

Calling the UN “inutile”, Duterte said the Philippines could invite China, African nations and other countries to create a rival international body. He went further, slamming the UN’s response to other global issues.

“Look at the iconic boy that was taken out from the rubble and he was made to sit in the ambulance and we saw it,” Duterte said. The picture of Omran Daqneesh, a five-year-old Syrian boy has recently gone viral around the globe.

“Why is it that [the] United States is not doing anything? I do not read you. Anybody in that stupid body complaining about the stench there of death?”

The Philippine leader also attacked the US for more members of the public dying as a result of police violence.

“What do you think the Americans did to the black people there? Is that not rubbing off also? And (critics) say what?”

The angry tirade at the news conference in Davao City came after the UN’s special rapporteur on summary executions, Agnes Callamard, urged the Philippines to stop extrajudicial executions and killings, saying “state actors” could be punished for the “illegal killings.”

About 900 people have been killed by unidentified attackers since May, when Duterte was elected, and another 665 died at the hands of security forces, according to the national police chief.

Duterte, however, has vehemently denied these accusations, and said that the police only fired in self-defense, while he also lashed out at the UN.

He shrugged off the prospect of repercussions that could follow as a result of his remarks.

“I don’t give a shit about them. They are the ones interfering,” Duterte said.

He also wondered whether UN officials were indeed threatening to jail him and repeated that he was ready to sacrifice his life and presidency for his country.

Duterte has developed a reputation for being very outspoken and even rude at times. Earlier in August, he called the US ambassador in the country “gay” and a “son of a bitch.”

However, on Monday Philippines Foreign Affairs Secretary Perfecto Yasay said the country will remain in the UN, adding that Duterte’s announcement “is a statement expressing profound disappointment and frustration.”

“We are committed to the UN despite our numerous frustrations with this international agency,” Yasay said at a press conference.