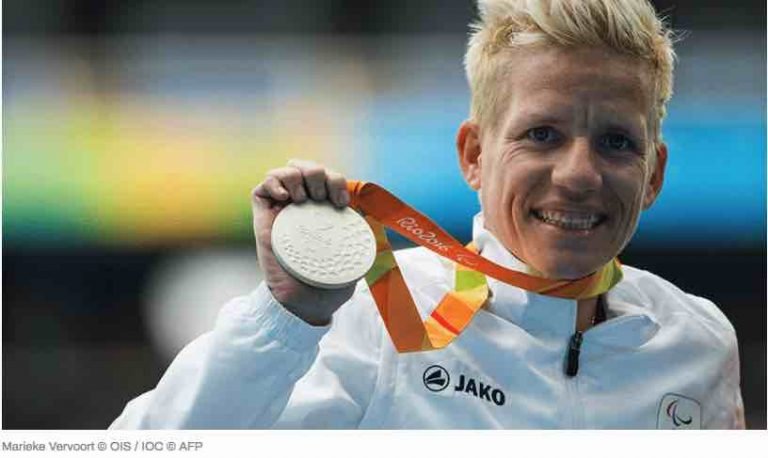 Wonderful! Suffering is not acceptable. We are born for happiness and pleasure!

A Belgian Paralympic athlete who suffers from an incurable form of progressive tetraplegia has revealed she is ready to be euthanised to get over the pain which has become unbearable.

Marieke Vervoort who won four Paralympic medals, including the coveted gold in London in 2012, signed euthanasia papers in 2008 so she can decide when to end her own life. She, however, decided to end her life after the 2016 Games in Rio which was her “last wish.”

After claiming Paralympic silver in Brazil in 2016, the Belgian athlete pointed out she was not going to die by euthanasia immediately but when her “bad days outnumber the good.”

“Nobody knows this, but three days before my first race in Brazil I was in hospital, because I was being sick constantly and dehydrating. I was so angry, and yet I came second. I suppose when you are mad, you are a lot tougher than normal,” she told the Telegraph.

“Everybody sees me joyful, winning medals, being strong, but they don’t see the other side. That is why every Paralympian is, to me, a champion,” Vervoort added.

Vervoort’s health problems began in 2000 when she was diagnosed with the rare progressive tetraplegia condition, which first affected her achilles tendons and rapidly spread, paralyzing her limbs. By 2008, her condition seriously deteriorated and the young woman, who had previously led an active life practicing triathlon and deep-sea diving, found herself in a wheelchair after her legs stopped working altogether.

Doctors say her degenerative spinal disease, also known as quadriplegia – which takes away the use of all four limbs and the torso – originated from a rare deformation between the fifth and sixth cervical vertebrae. However, they fail to explain the reason for excruciating pain which tortures the athlete.

“I don’t want to suffer any more,” Vervoort said.

“It’s too hard for me now. I get more and more depressed. I never had these feelings before. I cry a lot. Now even my eyesight is disappearing. An optician saw me and rated one eye two out of 10, and the other just one. He said there was nothing he could do, because the problem was coming from my brain. Then a neurologist stayed with me the whole night while I had one spasm after another. She said it wasn’t an epileptic seizure but just the body screaming, ‘I’m in so much pain. I’m done,” she said despairingly.

“I can’t sleep at night. My psychologist knows it. I want her to be with me when I die. She works at the hospital but even she says, ‘It is a lot that you are going through. I have never seen anything like this.’”

The 38-year-old said she didn’t want to give up and spend the rest of her life in a wheelchair, but all her efforts to fight back the disease have been in vain.

“I’m a Taurus,” Vervoort said. “If I want something, I go for it. I never give up easily. I didn’t want to accept that I would end up in a wheelchair. But in 2000 I couldn’t do it any longer, although I was still able to use my stomach and my back muscles. Even that has become less and less. Now I’m paralyzed all the way to my breasts. My finger function is going down as well. I have such a strong heart, but the pain medication is doing nothing any more. They have given me so many injections that everything is broken and hard. Sometimes the liquid goes in and comes straight back out.”

Vervoort said she feels like a 90-year-old person and has already completed all the necessary pre-arrangements for her death. She has written letters to loved ones, which should be opened and read when the moment comes. She has given orders to release white butterflies out of a red box to mark her passing. Vervoort, who considers herself an atheist, has rejected a church funeral.

In Belgium, where euthanasia is legal, three different doctors must confirm that the patient is in a state of unbearable and incurable pain before giving him or her the lethal medication. Vervoort already has that confirmation signed.
She wishes for her ashes to be scattered in the ocean near the Canary Island of Lanzarote, which she calls her “favorite place in the world.”