India’s Modi calls for reform in speech to UN 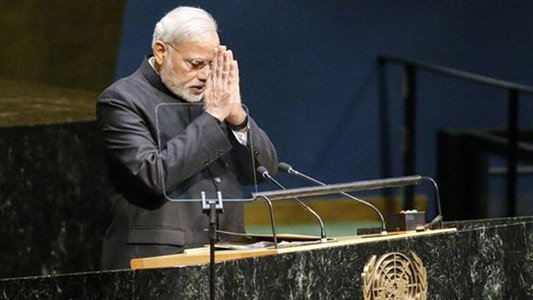 He is absolutely right! How can India with 1.2 billion citizens not be in the permanent security council while dwarf countries like France and UK with both totaling around 65 million inhabitants? That’s 20 times less people!!! The only explanation is western Imperialism and colonialism! Totally unacceptable as well as the Christian calendar used by the UN. If they don’t change it all non western nations should quit the UN and create a more democratic organization where each country would have a vote proportional to their population, if democracy has any value, and a non religious calendar.

UN institutions which reflected the imperatives of the 20th Century will not be effective in the 21st and should become more “participative”, he argued.

India has long lobbied for a permanent seat on the Security Council.

Mr Modi also said he wants peace talks with Pakistan but insisted it must create an “appropriate atmosphere”.

India and Pakistan have fought three wars against each other since independence in 1947, two of them over the disputed territory of Kashmir.

The Hindu politician is making his first trip to the US as prime minister at the invitation of President Barack Obama, after long being denied a US visa over religious riots in Gujarat in 2002, in which he denies any wrongdoing.