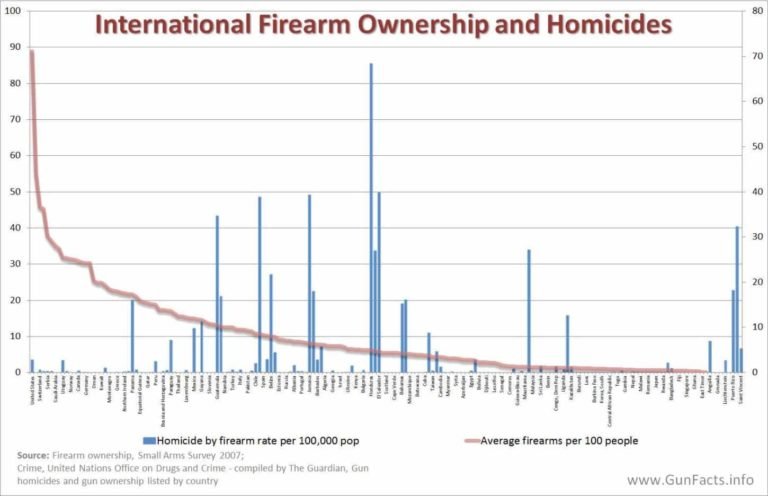 A very clear graph which shows that countries with much fewer firearms have indeed a much higher number of homicides. So owning guns is not the problem: the problem is education, to be polite and respect others; and before all, absolute respect for human life.

The data for the graphic above was taken from the Guardian, a leftwing publication in England. Firearm ownership rates are from the Small Arms Survey in 2007, so it is a bit dated. The per capita ownership in the United States has gone up considerably since then.

It is now about 120 firearms per 100 people. U.S. citizens purchased 94 million firearms during the Obama presidency. They have likely purchased another 6 million in the first 8 months of 2017.

It varies from zero to a high near 80 per 100,000. There was only a small negative correlation, of -.137. That is not a strong correlation. It shows that the homicide rate tends to fall a bit with higher firearms ownership.  It is not statistically significant.

It does not show causation. There could be many other factors involved. For example, the rise in firearms homicides in the United States in 2015 is likely correlated with the Ferguson Effect. Several large cities have essentially withdrawn active policing from urban crime centers because of accusations of racism.

Homicides have sharply risen in those areas.  Another reason is general prosperity. Places where there is the rule of law usually have higher prosperity and higher legal firearm ownership rates. Both are associated with lower homicide rates.

The slight negative correlation between firearms ownership and homicides confirms observations made after reading most of the literature on the subject. The rate of firearms ownership has little to do with the overall homicide rate.

If there is a relationship, a higher legal firearms ownership rate means slightly less crime.