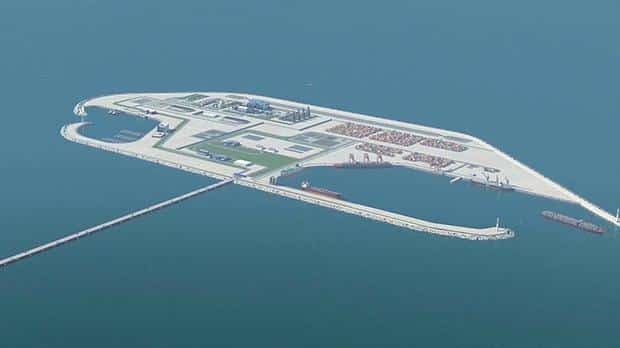 Creating a kind of Alcatraz or concentration camp much easier to control, and afterward including guard towers and dog patrols. Not surprising it’s a project from the Intelligence minister of Israel. Why not building this island to relocate the thousands of illegal Israeli settlers occupying Palestinian land?

Israel is considering building an artificial island with sea and air ports off blockaded Gaza, as a long-term solution to shipping goods into the Hamas-run Palestinian enclave, the transport minister said.

Yisrael Katz told Army Radio on Wednesday he wants an international force to control the island for “at least 100 years” and for unloaded cargo to be brought into Gaza along a 4.5-km (3-mile)-long bridge with a security checkpoint to prevent arms smuggling.

“The Israeli military would continue the naval blockade, but in a more localized way,” he said.

Katz said he had pitched the project to Prime Minister Benjamin Netanyahu, who told him to put together a plan, which “has been under examination for many months” by experts.

A spokesman for the West Bank-based Palestinian Authority described the idea as “pure fantasy” and an attempt by Israel “to divert attention from the real problems of Gaza resulting from the Israeli siege.”

A Hamas spokesman called it “a Zionist effort to … internationalize” the blockade.

“I am at the stage where the prime minister has to give the green light,” Katz said. “This has not happened yet … I am certain the Europeans and the Americans and many private elements will be willing to be part of this.”

Israel and neighboring Egypt tightened their blockade of Gaza after Hamas Islamists opposed to peace with the Jewish state seized control of the territory in 2007 from forces loyal to Western-backed Palestinian President Mahmoud Abbas.

Israel eased restrictions on the overland passage of goods through its Gaza border in the wake of a world outcry over the killing of nine pro-Palestinian Turks in confrontations during a raid by Israeli commandos on a Gaza-bound flotilla last May.

Citing security concerns, Israel does not allow a sea or air port to operate in the enclave.

“An island would … give the Palestinians port services and even an airport down the line,” Katz said, proposing the project include desalination and power plants, hotels — and Hamas’s rival, the Palestinian Authority, as a partner.

“We have built models and there are many entrepreneurs who are interested and prepared to invest billions and make money,” he said, without giving further details.

The proposal was leaked on Tuesday to Israel’s Channel Two TV, which speculated it could be included in a speech that Israeli officials have said Netanyahu might deliver in the coming weeks outlining ideas to revive peace talks.

Palestinians have refused to return to U.S.-brokered negotiations, which froze soon after they began in September, until Netanyahu halts settlement building in East Jerusalem and the West Bank, areas Israel captured in a 1967 war.

Asked when the island proposal would be presented to Netanyahu’s cabinet, Katz was non-committal, saying: “Soon, I hope.”