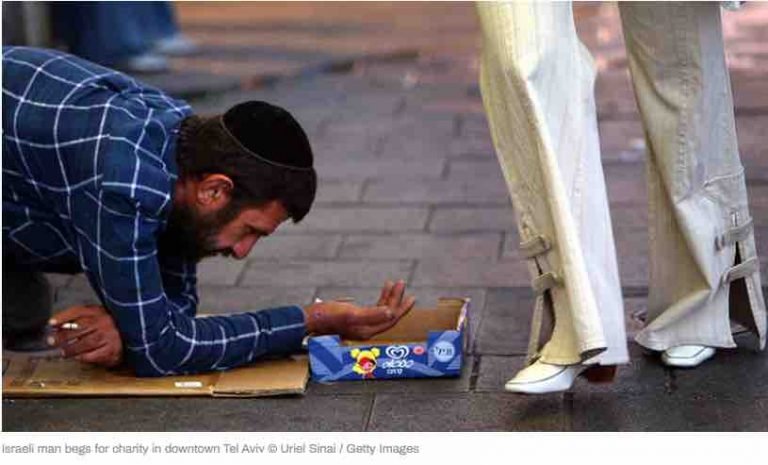 A report released by the Taub Center for Social Policy Studies in Israel shows the country has the highest poverty rates among OECD countries and faces “worrisome trends” that could have disastrous effects on its growing population.

According to the Picture of the Nation 2017 report, with Israel’s aging population and rising costs across the board, its “current sources of economic growth are not sustainable.”

The country ranks 22nd out of 34 of the OECD (The Organisation for Economic Co-operation and Development) regarding GDP and takes the 24th spot within the market income poverty rate. Among developed countries, Israel has the highest percentage of its population living below the poverty line.

“The past year has seen a decline in unemployment and a large rise in GDP,” but “unfortunately, it appears that this positive trend will not continue and new sources of growth must be found,” said the report.

The Taub Center also described Israel’s four percent GDP growth as an “outlier and not a trend.”

A separate report which was released earlier this month by the Shoresh Institution for Socioeconomic Research looked at economic trends over the entire 69-year history of the country. It concluded the economy shows deep-seated and long-term shortcomings that threaten to weaken the army and constitute an “existential threat” to the country’s future.

In terms of GDP, Israel has been falling further and further behind the G7 average since the mid-1970s, with a more than threefold increase having developed in the gap between them. This, according to the report, “reflects steadily widening disparity between what an employed person living in Israel can attain and what that person could attain in the countries that are pulling away from Israel.”

Professor Dan Ben-David, founder and chair of the Shoresh Institution and co-author of the report, has warned if Israel’s Prime Minister Benjamin Netanyahu “continues to ignore the future” the country could be facing a catastrophe of massive proportions.

Netanyahu has recently held some meetings with Israeli media outlets, claiming the reports do not reflect “what the public feels.”