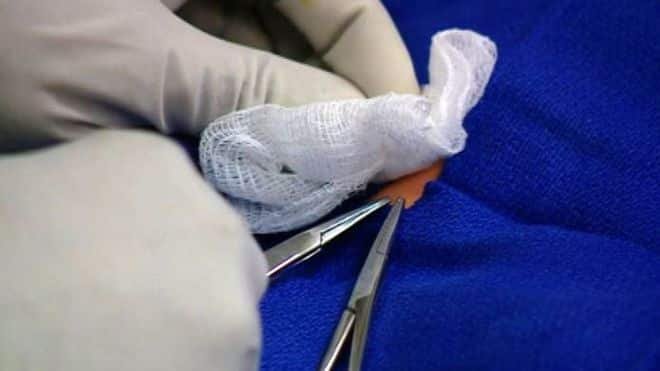 Circumcision is a criminal genital mutilation and should be forbidden worldwide. Period.

A two-year-old boy has died from blood loss following a failed circumcision at a migrant centre in Italy.

The boy’s twin brother also underwent the procedure in Rome’s north-western suburb of Monterondo and is recovering in hospital.

A 66-year-old man has been charged with murder, according to Italian media.

Some 5,000 circumcisions are performed in Italy each year but more than a third are carried out illegally, according to health charity Amsi.

Cultural non-profit group Arci said the procedures had taken place at a refugee centre it runs with the local council in Monterondo.

“It is a tragedy that leaves us speechless,” Arci said in a statement on Facebook, adding that it would take civil action once those responsible for the child’s death had been determined by police.

The two boys, who have not been named, were born in Italy in 2017 to a Nigerian mother who has five other children in Nigeria.

Local media say the mother had asked for the operations in respect for Nigeria’s Islamic traditions, despite being Catholic herself.

The medical credentials of the doctor are reportedly being questioned by police.

Ansa said the man arrested was an American citizen of Libyan origin.

“It is an absurd tragedy,” said Antonino Lupi, mayor of Monterondo, in an interview with the Corriere Della Sera.

Circumcision is currently unavailable in public health institutions in Italy.

As a result, those from poorer backgrounds can “end up in the hands of unscrupulous and unskilled people, who for €50 or €20 practise circumcision,” Mr Aodi said in a statement.