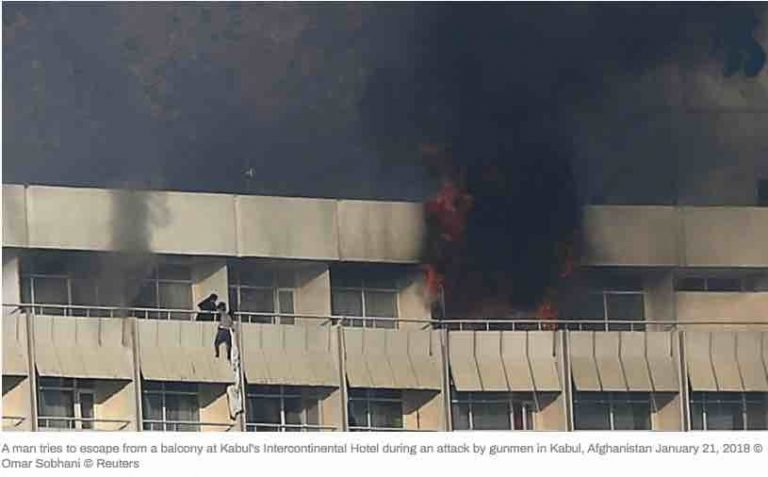 And not only from Afghanistan but everywhere else, Iraq, Syria, Libya, Okinawa, etc…

The US has no business in Afghanistan but it loves war and could be there for another 17 years, killing hundreds of thousands more people, according to Lew Rockwell, chairman of the Ludwig von Mises Institute.

The US State Department confirmed Tuesday that several Americans were among the victims in Saturday’s attack on a hotel in the Afghan capital, Kabul, where 22 people died in the overnight siege by Taliban militants, local officials said. On Wednesday, a suicide attacker detonated a car bomb next to the office of the humanitarian group Save the Children in Jalalabad.

RT spoke to Rockwell, a political consultant who believes the US military presence is aggravating the situation in Afghanistan.

RT: The US is now ramping up the fight against the Taliban by sending new aircraft for close-air support. Do you believe that’s connected to the attack?

Lew Rockwell: No, I think Trump has already talked about sending in more troops and more planes and other weapons. This is a further unfortunate back down from the campaign promises he made. He said some very good things about getting out of Afghanistan, that the US had no business there. And then of course as soon as he was elected, he has switched and he is now stepping up the war in Afghanistan. It is terrible these people were killed. I don’t think we have an idea how many Afghan civilians have been killed in the 17 years of this war, how many soldiers on both sides. It is a terrible thing. The US has no business in Afghanistan, any more than Russia did, any more than Alexander the Great did. The US has got to get out, let the Afghans run their own county.

The Taliban is, we call them the Taliban, which means “the students”. That is just the name for Pashtun people, the majority of people in Afghanistan and in Pakistan as well. I think we need to get out, let people run their own lives, stop killing, stop all the weapons, stop all the terrible things the US empire does: stir up trouble in order to make itself seem needed. [It’s] very bad.

RT:Is the Afghan government capable of handling security without US support?

LR: No, they can’t. The Afghan government itself said that it would only last a few months if the US pulled out. There is a hint that the Afghan government, maybe they are to go with the US troops and have new people come in. Why is the US killing all these people, spending trillions of dollars on Afghanistan to have a very unpopular government in power? What is that? It’s just typical imperialism; it’s like ancient Rome, Babylon, the British or many others. The only answer is – to get the heck out.

RT:The hotel siege is the latest reminder of the continuing toll paid by Washington in the Afghan War. Why aren’t there any tangible signs of resolution?

LR: I think the US likes the war. The US likes being at war all over the place, all over the Middle East, all over other areas in the Far East. They love being at war. They love spending the money; they love the military industrial complex; they love all the trouble they cause. And they say, “That just shows American needs to be there because there is so much trouble and so many people being killed.” But actually it shows the opposite – the US needs to get out of Afghanistan, get out of Syria, get out of every other single foreign country it’s in and do what Trump promised – put America first. How about taking care of America, a lot that needs to be done here at home, leave other peoples alone, leave other countries alone, stop killing people all over the world and expecting to be loved for it.

RT: The Intercontinental Hotel is one of the most protected areas in Kabul. How much of a setback is this for the Afghan government?

LR: It is probably is a setback, it is where CIA people stay, for example. We are not going to hear that mentioned. They just talk about the Afghan ally. A lot of very important civilian US officials stay there. This is a real setback and no matter how much they promise they are going “to change anything,” “it is going to be better,” “it is going to be safer,” of course, it’s not. And the people of Afghanistan don’t like being occupied. A lot of Americans have a tough time understanding that they don’t like foreigners occupying them, installing a government they hate and running their lives, they don’t like it. We need to have a peace talks with the Taliban, I have no question that they would like to have peace talks with us that we could get out and let the Afghans handle their own lives in their own country. That is the only solution. The US can be there another 17 or 18 years, kill hundreds of thousands more people, mostly civilians, of course. They can do many terrible, horrible things. It is about time we stop that stuff.