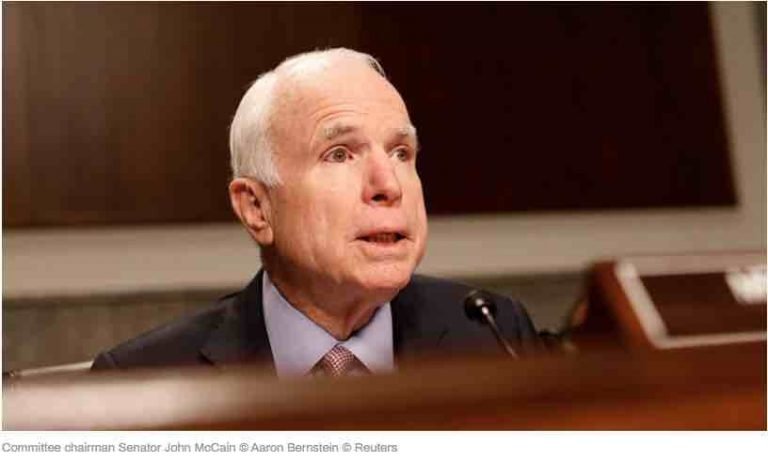 A proof that the USA attacks only weak states and that, as long as the USA doesn’t destroy all its atomic bombs, all countries must try to have them if their leaders do not want to suffer the fate of Saddam Hussein or Kaddhafi, including millions of civilians deaths poetically called “collateral damages”. That’s why the UN must vote for a total ban on nuclear weapons!

North Korea not only has a nuclear deterrent, but conventional weapons that can hit US soldiers stationed in South Korea and nearby military bases in Japan, Brian Becker, director of anti-war ANSWER coalition, told RT. Other analysts join the discussion.

McCain, who dined with the president on Monday, said the key to solving the crisis in the Korean Peninsula is China.

“The Chinese can put the brakes on this [Pyongyang’s nuclear program]. I do not believe that [North Korean leader] Kim Jong-un is going to do that by himself. I don’t think he’s irrational, but I don’t think he’s concerned about the welfare of his people to say, the least,” he said.

So why the change in tact for John McCain and other hawks in Washington when addressing the North Korean crisis, as compared with their more belligerent stance when dealing with Syria?

I think John McCain, generally speaking, is a politician who has never found a war that he doesn’t like. He is always the advocate of the most aggressive militaristic foreign policy. What his comments on North Korea represent and what they reflect is an acknowledgement, even by the hardcore militarists in Washington, that a war with North Korea will not be like Iraq, it will not be like Libya. A senior Bush administration official from George W. Bush’s administration told me that the US invaded Iraq because it was low hanging fruit, meaning it would be easy to capture it.

That is not true with North Korea. North Korea not only has a nuclear deterrent, but conventional weapons they can obliterate thousands of American soldiers that are stationed in South Korea and nearby military bases in Japan. This would not be a war in which all the bleeding is done on the other side. That becomes a deterrent for US policy makers and those traditionally representing the most hawkish views like John McCain.

I don’t think they’re backing down when it comes to North Korea… I think what was happening with Donald Trump was a lot of bluster and a lot of bluff. You never know with Donald Trump what his bottom line is. I don’t think he is a very good negotiator because you never know what his bottom line was. He thinks… the North Koreans will be scared. He thinks if he drops a 21,000-pound bomb on Afghanistan it would create fear and trembling in North Korea. North Korea has been through a lot. Five million Koreans died in the Korean War. They’re not in a trembling state. So I think there’s a recognition now that unlike Syria, North Korea has the capability of hitting back, and in fact will hit back and American soldiers are close at hand. They are just 30 miles away in Seoul and at other military bases in the southern part of the peninsula.