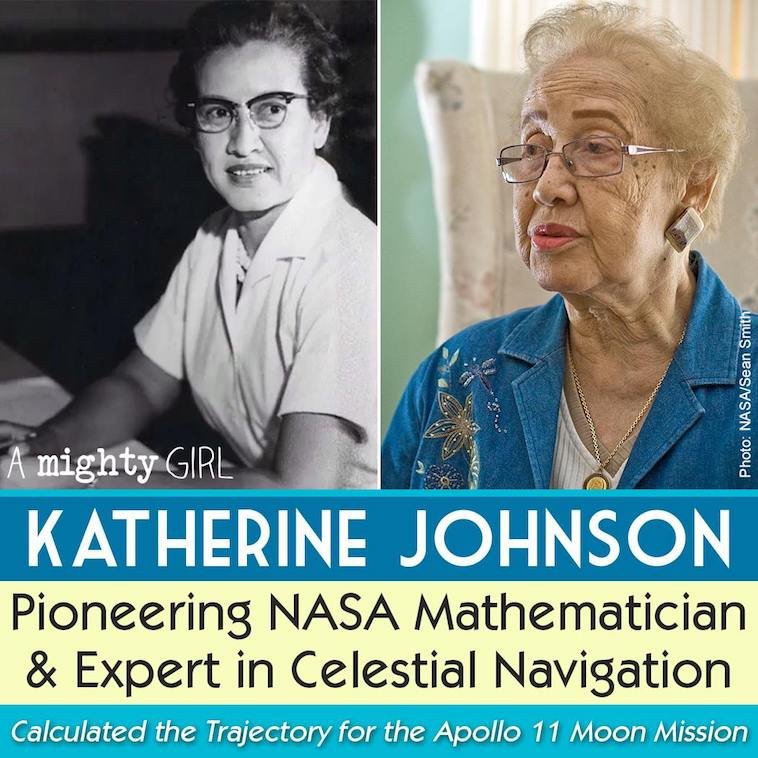 Yes, she is a black woman and a genius.

Happy 98th birthday to pioneering NASA physicist and mathematician Katherine Johnson! One of the earliest women to join NASA, Johnson’s skills in celestial navigation were renowned. Among other mathematical feats, she calculated — by hand — the launch window and trajectory for the 1961 space flight of Alan Shepard, the first American in space, and the 1969 Apollo 11 flight to the Moon. For her contributions to the space programs and for blazing a trail for women and African Americans at NASA, Johnson was presented with the Presidential Medal of Freedom, the country’s highest civilian award, last year.

Although Johnson excelled in school — graduating from high school at 14 and college at 18 — her early access to education was challenging. The only school for African Americans in her small West Virginia town stopped at the 8th grade so to ensure she could continue her education, she moved with her mother and siblings to a larger city 120 miles away while her father remained on the family farm. After graduating from college summa cum laude with degrees in French and mathematics, she learned that the National Advisory Committee for Aeronautics, which later became NASA, was looking for women to work as “computers”.

According to the National Visionary Leadership Project, “At first she worked in a pool of women performing math calculations. Katherine has referred to the women in the pool as virtual ‘computers who wore skirts.’ Their main job was to read the data from the black boxes of planes and carry out other precise mathematical tasks. Then one day, Katherine (and a colleague) were temporarily assigned to help the all-male flight research team. Katherine’s knowledge of analytic geometry helped make quick allies of male bosses and colleagues to the extent that, ‘they forgot to return me to the pool.’ While the racial and gender barriers were always there, Katherine says she ignored them. Katherine was assertive, asking to be included in editorial meetings (where no women had gone before.) She simply told people she had done the work and that she belonged.”

Early in her career, Johnson played a critical role in early spaceflight by calculated flight trajectories, including that of Shepard’s historic first flights into space in 1961. In the following years, when NASA first began using computers, she would double check their calculations to ensure they were accurate. “You could do much more, much faster on computer,” Johnson explains. “But when they went to computers, they called over and said, ‘tell her to check and see if the computer trajectory they had calculated was correct.’ So I checked it and it was correct.”

In her years since retiring from NASA, Johnson has spent much time talking with children about her experiences and the possibilities opened up by careers in science and mathematics. She recalls one question from a 4th grader during a long distance interview: “Each of them had their questions, and one asked, ‘are you still living?’ ” Johnson says with a laugh. “They see your picture in a textbook and think you’re supposed to be dead.” To Johnson, however, the most important lesson to pass on is the importance of education and self-reliance: “Luck is a combination of preparation and opportunity. If you’re prepared and the opportunity comes up, it’s your good fortune to have been in the right place at the right time and to have been prepared for the job.”