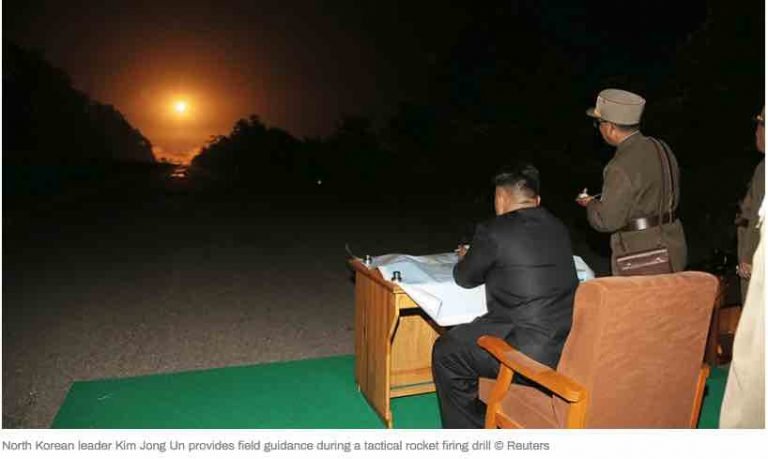 “The examples of Iraq and Libya have convinced it that nuclear deterrence is the only credible way to ensure its security.”…“They will eat grass but will not stop their program as long as they do not feel safe.” “What can restore their security? The restoration of international law”, said Putin and he is absolutely right… in other words, all US troops around the North Korea border must leave as soon as possible. THEY are responsible for the problem… not North Korea! If Russia or China was amassing troops around US borders, Americans would feel the same. There cannot be a double standard in the world. The rule of the strongest bullying small countries must end. That’s international law.

North Korean leader Kim Jong-un is extremely worried by threats made by US President Donald Trump and now Pyongyang is developing a new ballistic missile capable of delivering a nuclear warhead to America, a Russian nationalist party lawmaker says.

“Kim Jong-un has said that he would ‘tame the united states with fire’ and as part of this ‘taming’ they are now readying for tests a new intercontinental ballistic missile that, according to their calculations, must be capable of hitting the US West Coast,”Anton Morozov, a Liberal Democratic Party MP and member of the lower house Committee for International Relations, announced at a recent session of his party caucus, according to an unnamed party source quoted by Interfax.

Morozov visited North Korea together with two of his party colleagues on October 2-6. At the session, he emphasized that his trip had been coordinated with the Russian Foreign Ministry and the International Relations Committee chief Leonid Slutsky as a part of “Russia’s general political concept.”

According to Interfax’s source, Morozov also told his colleagues that the North Koreans were “very upset” over Trump’s recent speech in the UN General Assembly and many of them thought of it as a declaration of war on their country to which they were ready to respond.

In his speech before the UN General Assembly in mid-September, Trump threatened to “totally destroy North Korea” and stated that its leader Kim Jong-un, whom Trump chose to call ‘Rocket Man’, was on a suicide mission for himself and his regime.

Morozov also told fellow lawmakers that during the visit Russian parliamentary delegation clearly marked its position of non-supporting the aggressive tension between the United States and North Korea and called for creating conditions for peaceful settlement of the crisis.

“This is what we went to the Korean Peninsula for: to find some points of contact and mark the stimuli for the sides so that they can sit at the negotiation table,” he stated.

In early September, Russian President Vladimir Putin told reporters that he expected Pyongyang not to relinquish its nuclear and missile programs under pressure of sanctions and military threats, because the examples of Iraq and Libya have convinced it that nuclear deterrence is the only credible way to ensure its security.

“Ramping up military hysteria in such conditions is senseless; it’s a dead end,” Putin said. “It could lead to a global, planetary catastrophe and a huge loss of human life. There is no other way to solve the North Korean nuclear issue, save that of peaceful dialogue.”

“They will eat grass but will not stop their program as long as they do not feel safe. “What can restore their security? The restoration of international law,” he said.