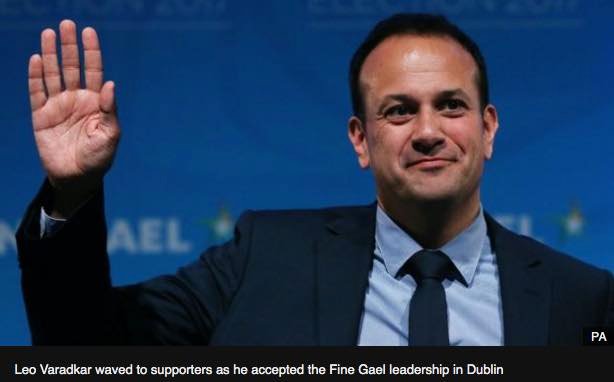 Leo Varadkar is set to become the Republic of Ireland’s next taoiseach (prime minister) after winning the leadership of the Fine Gael party.

The 38-year-old will become the first gay taoiseach and will also be the country’s youngest ever leader.

Mr Varadkar beat his rival, Housing Minister Simon Coveney, with 60% of the votes to lead Fine Gael – the biggest party in the coalition government.

He will succeed Enda Kenny as leader of the centre-right party within weeks.

Mr Varadkar is to contact Mr Coveney to discuss what position he will hold in government and the future of the party.

He is also expected to hold talks with Fine Gael’s partners in government and with Fianna Fáil next week.

The former GP is the son of an Irish nurse and a doctor from India and much of the media coverage of his victory has focused on Mr Varadkar’s background, age and sexuality.

The former first minister of Northern Ireland, DUP leader Arlene Foster, has spoken on the phone to congratulate Mr Varadkar. He has also received a letter from Prime Minister Theresa May.

‘Prejudice has no hold’
Following the announcement on Friday evening, the new Fine Gael leader said he was “honoured” to accept the “enormous challenge” ahead of him with humility.

“If my election shows anything it’s that prejudice has no hold in this Republic,” he said.

“When my father travelled 5,000 miles to build a new home in Ireland, I doubt he ever dreamed his son would grow up to be its leader.”

He said Simon Coveney had gained his and the party’s admiration for his “principled and spirited” campaign and he looked forward to working with him to bring Fine Gael and Ireland forward.

“Any child growing up in Ireland now, I hope, looks at me and my unlikely story and my background, and everything about me, and perhaps says to themselves, that there is no office in this state that I can’t aspire to, nothing that they can’t do if they believe in themselves,” he said.