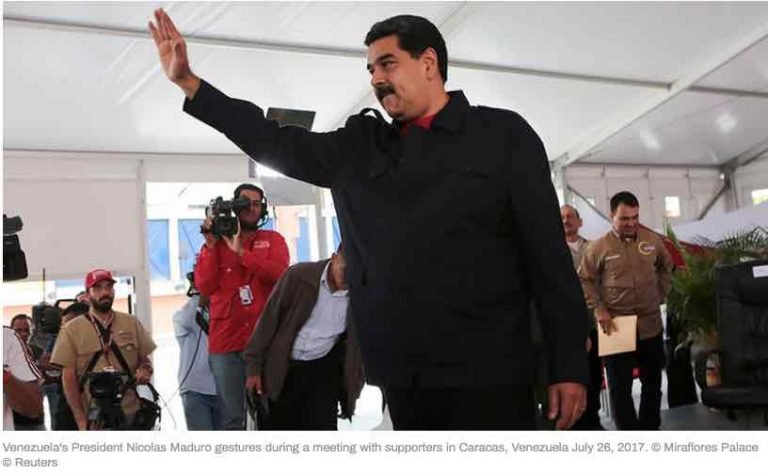 RAEL’S COMMENT:
And probably, if the US and puppet Nato continue their aggressive policy at Russian borders, a Russian military base in Venezuela is well possible as well as in Cuba and Bolivia.

The US must abandon its interventionist policy towards Venezuela and steer clear of the internal affairs of other Latin American countries, Venezuelan President Nicolas Maduro said in a message to Donald Trump while speaking to RT.

In an interview with RT Spanish, Maduro stressed that his country strives to live peacefully with its neighbors, and called on US President Donald Trump to yield to reason and put an end to his administration’s aggressive policy towards the Venezuelan government.

“As a president, I appeal to him, to President Donald Trump: Stop aggression towards Venezuela. Venezuela is a fundamental basis of stability in the whole Caribbean Basin,” Maduro said, adding that he hopes his words do not fall on deaf ears.

“Think well, US strategists, Venezuela wants to live in peace, it wants to live quietly. Stop your aggression,” Maduro said. He added that in the worst case scenario, “the Bolivarian revolution will have to take up arms and we will be again fighting under the same flag and across our border.”

Attempted blockade
Slamming the US for its attempt to disrupt Venezuela’s economy with an “indirect blockade” targeting the country’s financial system, Maduro said that Venezuela is ready for “any scenario.”

The ultimate goal of that blockade is to trigger a default of Venezuela’s economy, Maduro argued, adding that the US attempted to do the same thing in 2015 and 2016, with no success.

“We have economic power, economic capacity. Venezuela [has] always paid all its bills, met its obligations. And it will do so in 2017, 2018, and 2019,” he assured, adding that Venezuela’s economic well-being is not exclusively dependent on Washington.

“If we suffer a blow from the north, the roads leading to the west, to the south, and to the east, fortunately, will stay open for Venezuela,” he stressed.

Opposition gone radical
Weighing in on Venezuela’s ongoing unrest which has been ravaging the Latin American country since April, Maduro said he believes the solution to the crisis will only be reached “through democracy, popular vote.”

More than 100 people are now estimated to have lost their lives in violent clashes between government supporters and opposition activists over the past four months. The opposition has ramped up its protest activity in the run-up to the election of the National Constituent Assembly (ANC), scheduled for July 30, announcing a week of protests and launching a two-day nationwide strike that kicked off on Wednesday.

Maduro said he attempted to reach out to the opposition and engage with them in a political process that would have been within the rule of law.

“In May, I spent three and half weeks seeking a direct dialogue with the opposition for them to become members of the Constituent Assembly, but they refused to,” he said, adding that the opposition has found itself in a downward spiral since declining his proposal.

“They have gone to the radical right. They have become prisoners of strategies of local violence, not giving the way to even those groups of people who voted for them.”

Stronger Russian relations
The ongoing political turmoil in the country has not affected Venezuela’s strategic cooperation with Russia, first and foremost in the gas and oil industry, Maduro told RT, adding that such cooperation is actually strengthening.

“We have a strong alliance with Russia,” he said, specifically noting Russia’s decision to boost investment in the Orinoco oil basin and the Venezuelan gas industry.

“I can say that in the second semester we will sign important documents that would expand mutual investment between Russian oil and gas companies and our PDVSA [Petróleos de Venezuela, S.A., a state-owned oil and natural gas company].”