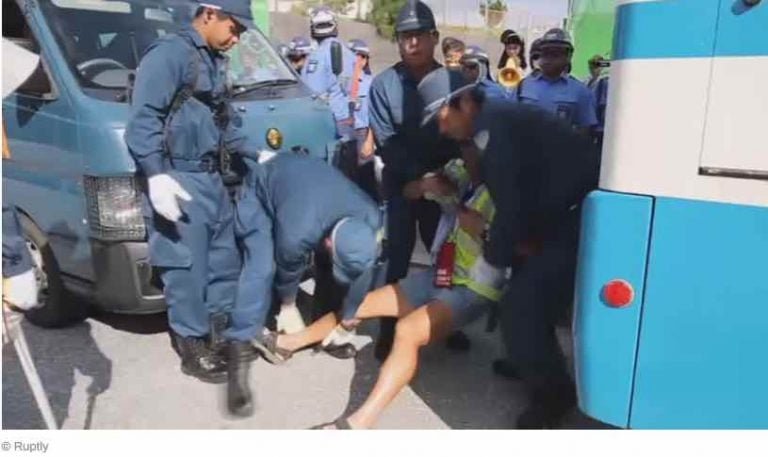 Police have forcibly removed protesters staging a sit-in outside the US Marine Corps’ Camp Schwab in Okinawa in a campaign to protest the relocation of the Futenma base.

The US Marine Corps Futenma Air Station is going to be moved from the densely populated Ginowan to a less populated location in eastern Okinawa – the Henoko coastal area of Nago.

Using rocks and gravel intended for the construction of the base, protesters reportedly refused to let trucks pass, blocking the way near the neighboring US Marine Corps base Camp Schwab.

“Marines out!” and “Stop illegal work,” the demonstrators’ posters read.

The video, released by Ruptly video news agency, shows sumo-esque scuffles between police and protesters, and security forces dragging demonstrators by their arms and legs.

The offshore construction work started in February despite strong opposition from locals, who regularly stage large-scale protests with thousands of people. Okinawa Governor Takeshi Onaga is among those who object to the heavy US military presence on the island, saying that the Futenma base should be removed, not relocated.

The plan is to build a new US Marines base over the coming five years on the island of Okinawa, something that the local governor, Takeshi Onaga, and the public are at odds with.

Onaga is against the relocation, stating it would destroy the environment of the bay surrounding the new base site.

On Tuesday, an Okinawa Prefectural Assembly committee asked for legal action against damage to fishing grounds caused by the relocation, and the entire assembly is set to cast their votes on the issue on Friday. If the resolution passes, legal proceedings against the government in Tokyo could begin next week.

There are around100,000 US military personnel in Japan, and half of them are in Okinawa, according to the official website of the US Forces Japan.

The US presence in the country has been a hot topic with the Japanese public, who cite jet crashes related to the US bases and sexual assaults linked to US military personnel as causes for objection.