Model describes universe with no big bang, no beginning, and no end 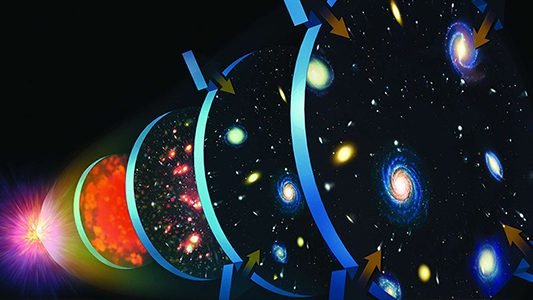 Scientists getting closer to accepting infinity.

By suggesting that mass, time, and length can be converted into one another as the universe evolves, Wun-Yi Shu has proposed a new class of cosmological models that may fit observations of the universe better than the current big bang model. What this means specifically is that the new models might explain the increasing acceleration of the universe without relying on a cosmological constant such as dark energy, as well as solve or eliminate other cosmological dilemmas such as the flatness problem and the horizon problem.

Shu, an associate professor at National Tsing Hua University in Taiwan, explains in a study posted at arXiv.org that the new models emerge from a new perspective of some of the most basic entities: time, space, mass, and length. In his proposal, time and space can be converted into one another, with a varying speed of light as the conversion factor. Mass and length are also interchangeable, with the conversion factor depending on both a varying gravitational “constant” and a varying speed of light (G/c2). Basically, as the universe expands, time is converted into space, and mass is converted into length. As the universe contracts, the opposite occurs.