More Than 100 Wounded in Brutal Police Reaction to Teachers’ Strike 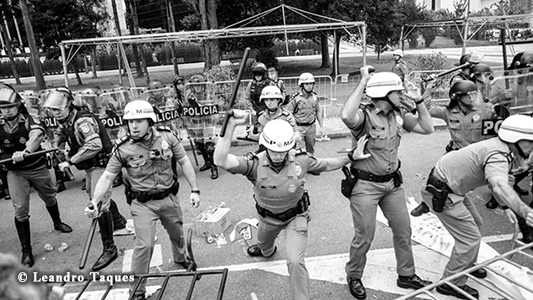 The world revolution has started….are you part of it?

A series of explosions were heard on April 28 up to six kilometers away from the Civic Center, the square in which the legislative assembly, state justice, and state government Paraná and the city of Curitiba (Paraná’s capital), in the southern region of Brazil have its main offices. The clashes were the result of violent acts by the military police against public servants, mostly teachers of the state of Parana.

On April 28, they protested against a series of tightening measures that the Legislature began to put up for vote for a second and final time. By late afternoon, it was known that there were at least 107 wounded – two policemen and 105 protesters. These ghastly numbers indicate a real massacre.

Reports during the night accounted for over 150 injured. Eight of the protesters are in critical condition due to injuries from police dog bites and rubber bullets.

On Monday, skirmishes between military police and public servants were registered, but on a smaller scale than the fateful and already historic April 29. On Monday, the MEPs had approved in the first vote, by 31 votes in favor against 21 such pacotaço, pushed forward by the governor Beto Richa (PSDB) to improve state’s finances, whose balance sheets Richa indicated would