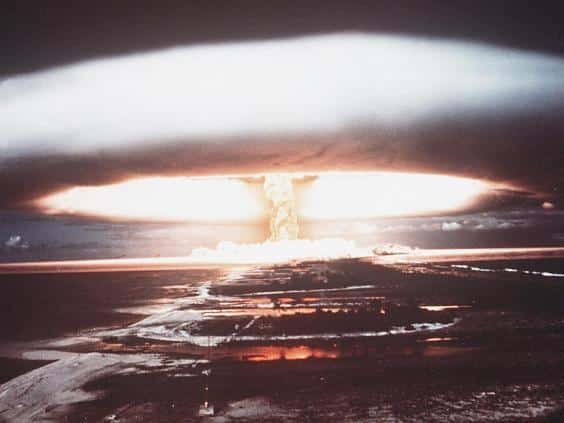 Fantastic success! But we must now continue our action to force the governments of rogue countries who wish to keep atomic bombs, which threaten the very survival of Humanity, to sign it in October, particularly the US, Britain, and France governments. It’s up to the population of these countries to force their governments to sign it to save Humanity! Our actions must continue, the deadline being now October. It is particularly hypocritical to see that the five dominants claim to stay the only nations having nuclear weapons, while India and Pakistan have it also, and even more hypocritical is the fact that everybody pretends not to know that Israel has also more than 100 atomic bombs! The funniest part is that countries that are the targets of the dominant western powers, scrutinizing them to make sure they don’t get nuclear weapons, like Iran, have voted to ban them. Shame also on the Netherland for voting against the ban… All these countries will bear the responsibility for the destruction of Humanity if it happens. Now the only way to push the big nations is to hope that as many small countries of the world get the atomic bomb, like that everybody will be so scared that they will make it forbidden. Don’t give up, we still have hope! Until then, let’s put pressure on the leaders in the pro-nuclear movement.

USA: I solemnly ask all peace lovers to promote the boycott of all American products, services, and tourism and instead to buy products, services, and tourism from countries who supported the ban. Sweden, Switzerland, Austria, Brazil, South Africa, Egypt, Indonesia, and the Philippines are beautiful countries for tourism, much more interesting than the USA. The last point to notice: no mainstream media in the USA, France, and Britain are reporting this vote. Mass manipulation at it’s worst.

One more thing: the nations against a treaty banning atomic weapons are definitely rogue as they are a tiny minority of Humanity: they cannot continue to claim that they wish to promote democracy while being a tiny minority of 5 nations among 180, wishing to continue to dominate the world in terrible fascist imperialism by being the only one to own nuclear weapons thanks to their hypocritical “non-proliferation treaty”.

More than 120 countries approved the first-ever treaty to ban nuclear weapons Friday at a UN meeting boycotted by all nuclear-armed nations.

To loud applause, Elayne Whyte Gomez, president of the UN conference that has been negotiating the legally binding treaty, announced the results of the “historic” vote — 122 nations in favour, the Netherlands opposed, and Singapore abstaining.

“The world has been waiting for this legal norm for 70 years,” since atomic bombs were dropped on Hiroshima and Nagasaki in August 1945 at the end of World War II, she said.

Setsuko Thurlow, who was a 13-year-old student in Hiroshima when a US nuclear bomb destroyed the city, said survivors “have worked all our lives to make sure that no other human beings should ever again be subjected to such an atrocity.”

None of the nine countries known or believed to possess nuclear weapons — the United States, Russia, Britain, China, France, India, Pakistan, North Korea and Israel — is supporting the treaty. Many of their allies also did not attend the meeting.

Instead of a ban, the US and other nuclear powers want to fortify the pre-existing Nuclear Non-proliferation Treaty.

That pact, which has been widely criticised as being ineffective, originally sought to limit the spread of atomic weapons beyond the five already in possession at the time of its inception – the US, Russia, Britain, France and China. It compels non-nuclear signatory nations to promise not to purse atomic weapons. In return, those who already own nuclear weapons would be obliged to commitment towards nuclear disarmament and guarantee non-nuclear states access to peaceful nuclear technology for producing energy.

In a joint statement, the UN ambassadors from the United States, Britain and France said their countries don’t intend to ever become party to the treaty.

They said it “clearly disregards the realities of the international security environment” and “is incompatible with the policy of nuclear deterrence, which has been essential to keeping the peace in Europe and North Asia for over 70 years.”