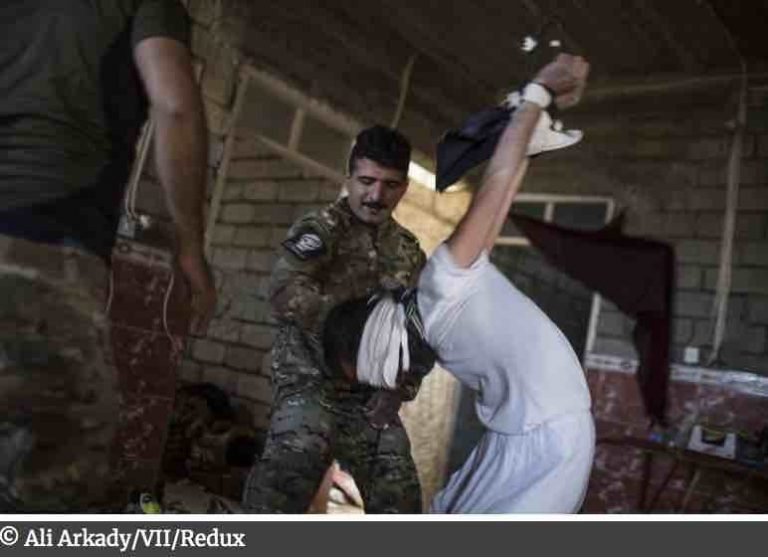 Iraqi forces, leading a vigorous battle to liberate Mosul from ISIS, have been exposed torturing and abusing their captives suspected of having terrorists links, according to a photographer who has been embedded with an elite unit of the Iraqi interior ministry.

Having worked alongside the elite Emergency Response Division (ERD) in Iraq, freelance photographer Ali Arkady documented how, in their battle against jihadists, Iraqi security forces resorted to the very tactics that are comparable to the brutal practices of their nemesis, IS.

The photographer, who earned the Iraqi soldiers’ trust to cover the Mosul frontline, was allowed to witness some of the “interrogation” sessions, intended to force confessions from prisoners of war accused of affiliation with the terrorist group.

In one instance, the soldiers were torturing a man whose sons were suspected of working with IS in what is known as the strappado. Horrendous images show the detainee hanged by his arms to the ceiling, blindfolded, with officers standing next to him – and adding weights to his back to intensify the agony.

Arkady eventually managed to flee the country, smuggling out the footage of abuse and torture, despite the Iraqi government’s attempts to suppress negative reporting.

RT’s Murad Gazdiev, who travelled to the embattled city in March, has personal experience of how “undesirable footage” is confiscated and how journalists are “threatened with bans for negative coverage.”

“Information is contained. One of the biggest and deadliest battles of the 21st century, is actually also one of the most censored and suppressed,” Gazdiev, said, adding, that all journalists in Mosul are guided by Iraqi media officials.

“In the course of Iraq’s tragic modern history, we have witnessed so many Iraqi citizens enduring the ugliest of assaults at the hands of combatants wearing a variety of uniforms,” Human Rights Watch (HRW) said in their reaction to Arkady’s material, when it first emerged in the German Der Spiegel magazine.

The gruesome scenes are reminiscent of the notorious Abu Ghraib torture and prisoner abuse, some human rights organizations have noted.

“This kind of torture, we’ve seen this kind of torture before. We’ve seen, it is similar to Abu Ghraib,” Mohammed Serkal, UN coordinator of the SALAM for Democracy and Human Rights NGO, told RT. “At the moment we see the United States getting involved in Mosul with other countries, which is not allowing other countries to get involved and oversee how the fight is taken place, how the Mosul is getting freed.”

“Any human being should be treated as a human being regardless if they are terrorists or they are criminals. They have to be given a chance to speak about the crimes they committed,” Serkal added.