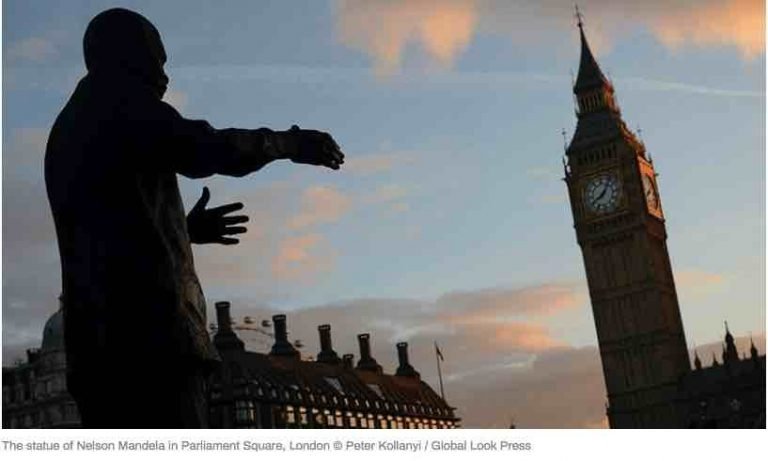 If we follow their reasoning, all Christian crosses in the UK should be removed because Jesus was not British and did nothing for England…

The statue of Nelson Mandela in London’s Parliament Square should be removed because the anti-apartheid leader was not British, did nothing for the UK, and was a violent terrorist, the far-right British National Party (BNP) has said.

David Furness, a BNP spokesman, told RT the bronze statue of the late president of South Africa should be removed from Parliament Square and placed in the South African embassy.

His call comes amid a growing public debate about the removal of public symbols that could be considered racist.

Calls to remove a statue of Confederate General Robert E. Lee from a park in Charlottesville, Virginia, led to violent clashes between far-right groups and anti-fascists earlier this month.

There are now similar calls in the UK for the removal of Lord Nelson’s statue, which stands atop Nelson’s Column in Trafalgar Square, because he has been deemed a white supremacist.

“Political correctness stops people from saying, ‘Oh it should not be there,’” Furness told RT.

“He wasn’t British, whatever he did he did for the South Africans, not for the people of this country.”

As a founding member of Umkhonto we Sizwe (MK, or Spear of the Nation), the armed wing of the African National Congress (ANC), Mandela was arrested in 1962 for conspiring to overthrow the South African government. He was given a life sentence on Robben Island.

Released 27 years later following global outcry and the dismantling of apartheid, he was elected president of South Africa in 1994.

The MK is thought to have perpetrated 150 public acts of terrorism and violence that killed 63 people and injured 483 in the fight to end apartheid.

Furness says Mandela should be considered a terrorist who “killed many people.”

“It’s very inappropriate to have a statue of a terrorist in Parliament Square,” he said, suggesting such a “bad example” could legitimize terrorism.

“[It would make people think] ‘I can set off some bombs, get what I want, and eventually it will all be forgiven,’” Furness added.

Mandela’s statue was erected in 2007 by then Mayor of London Ken Livingstone.

Speaking to RT, Livingstone said Mandela is one “greatest figures of the twentieth century who fought against the worst forms of racism.”

“He was completely right to fight for the freedom of enslaved black South Africans,” the former Mayor of London said.

“Anyone should be free to struggle for their own freedom.”

Ridiculing the BNP’s call to remove the statue, Livingstone said: “They don’t seem to remember that [South Africans] were once part of the British Empire and Commonwealth.”