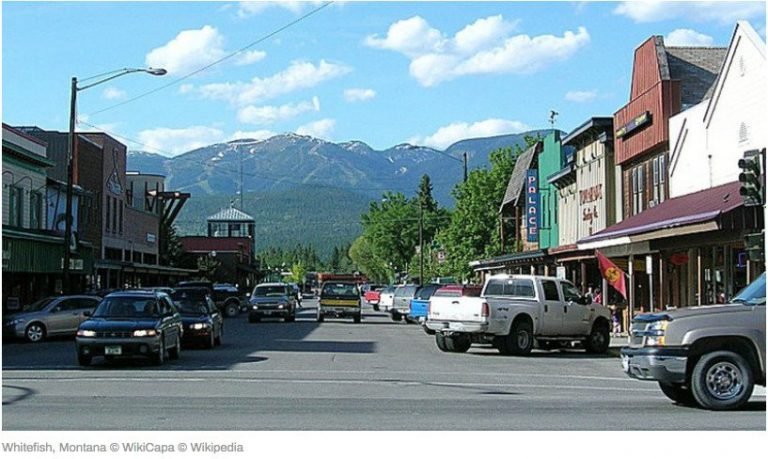 A neo-Nazi website has called for an armed march against a Montana Jewish community, using a graphic which shows the entrance to the notorious Auschwitz death camp and a yellow Star of David with the word ‘Jude’ printed on it.

The graphic was released last week by the Daily Stormer website, which is run by white supremacist Andrew Anglin.

“We are planning an armed protest in Whitefish. Montana has extremely liberal open carry laws, so my lawyer is telling me we can easily march through the center of the town carrying high-powered rifles. I myself am planning on being there to lead the protest, which has been dubbed ‘March on Whitefish’,” Anglin wrote, adding that skinheads will be bused in from the San Francisco area.

The website is also calling for followers to “take action” against Jews in Whitefish by writing and calling them with anti-Semitic messages. The website claims that Jewish residents were “threatening” a business run by the mother of fellow white supremacist Richard Spencer.

The site has published the names, phone numbers, and addresses of members of Whitefish residents, along with the Twitter handle and photo of a child. It also included photos of Jewish residents of Whitefish emblazoned with yellow stars.

It goes on to warn readers against using “violence or threats of violence or anything close to that” because it “just gives them [Jews] power.”

Last week, a local rabbi encouraged people to send notes of sympathy to victims of Jewish harassment in Whitefish, and asked people to put a menorah in their window to show solidarity with the Jewish community, the Anti-Defamation League (ADL) said on Friday.

In response, Anglin told his followers to put Nazi flags in their windows, as well as swastikas on their cars, homes and businesses. He also called on them to send hateful messages to two anti-hate organizations, according to the ADL.

“Not only is Anglin harassing the Jewish community of Whitefish, he is at the same time exploiting the situation there to promote anti-Semitic conspiracy theories about Jewish power and control. He alleges that Jews have targeted white supremacists and anti-Semites, but now he is somehow turning the tables on them,” the ADL said, adding that it has been in regular contact with Whitefish Jews and local law enforcement.

Meanwhile, the like-minded Spencer, president of the white supremacist think-tank National Policy Institute, has been making waves of his own, shouting “Hail Trump!” at an event in Washington, DC, last month, where he was greeted with Nazi salutes.

The local government of Whitefish, a town of just 6,000 people, has rejected Spencer’s ideas.