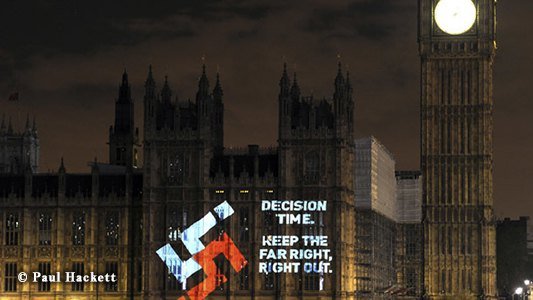 The rise in anti Jewish sentiments worldwide is without any doubt the fruit of the criminal policy of Israel. It’s a shame that all world Jews become targets because of that, while more and more of them are anti Zionists themselves and against Israel government.

ANeo-Nazis have been distributing anti-Jewish propaganda ahead of an anti-Semitic rally in North London, according to an elderly person living there.

The resident of Golders Green, a Jewish area where the rally is scheduled to take place, said a group of far-right protesters had called at his house and informed him that London would be “Jew free.”

The 88-year-old holocaust survivor, who asked to remain anonymous, told the Jewish Chronicle that the men had performed a Nazi salute in front of him and handed him a blue Magen David (the Jewish star) with the message “Jews go home” on it..