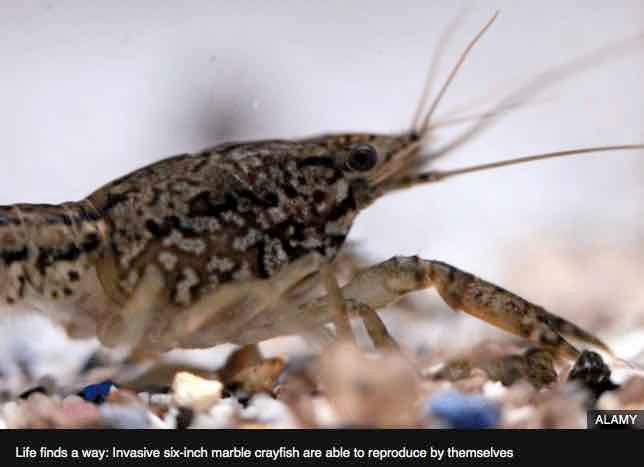 A mutant species of all-female crayfish taking over the world is not the latest science fiction film but a real-life environmental thriller.

A new study has found that marbled crayfish are multiplying rapidly and invading ecosystems across the world.

The ten-legged pests are descended from one single female with a mutation allowing it to reproduce without males.

These self-cloning ladies are found for sale in North America, despite a warning against keeping them as pets.

Sales of the six-inch creature are already banned by the European Union.

Procambarus virginalis did not exist three decades ago.

Born to a male and female slough crayfish, a species originally from Florida, the original marbled crayfish had an additional set of chromosomes – a mutation that made her distinct from her parents and allowed her to reproduce without having to mate.

Now officially a separate species, the marbled crayfish can be found in the wild in Japan, Madagascar, multiple European countries and the US.

The new study published in Nature, Ecology and Evolution describes the invasive species as a threat to wild ones, particularly seven native species in Madagascar.

“If you have one animal, essentially, three months later, you will have 200 or 300,” Dr Wolfgang Stein, one of the researchers, told Canadian public broadcaster CBC.

Dr Stein, who is a neurophysiologist at Illinois State University, told the BBC that they compared 11 marbled crayfish, spread through the pet trade to four locations on three continents.