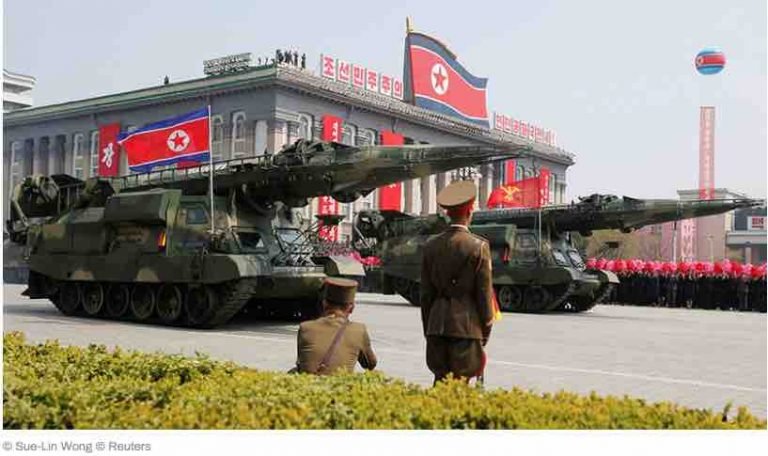 Finian Cunningham is absolutely right: “such demonic US behavior should actually turn world attention to who exactly is the real axis of evil and number-one threat to peace.”

US media reports this week blamed North Korea for having a dastardly role in an alleged chemical weapons massacre in Syria. As if the two countries could not be demonized enough. The latest spin of the “axis of evil” suggests Washington is hell-bent on war.

Demonize, dehumanize, destroy. That’s the logic being throttled by the Trump administration toward both North Korea and Syria. This week war hawk US Senator Lyndsey Graham after a dinner with President Trump referred to North Korean leader Kim Jong-un as a “nutjob,” while Trump earlier labeled Syrian leader Bashar Assad an “animal.”

Now the two “evil dictators” are bonded in US media reports for complicity in the alleged chemical weapons attack earlier this month in Syria’s Idlib Province, where it is claimed Assad’s armed forces dropped toxic munitions on civilians, killing up to 80.

The supplier of the alleged chemical weapons in Syria is the “Kim Jong-un regime” in North Korea, according to US reports.

USA Today claimed: “The horrors of the civil war in Syria have proved a blessing for North Korea. The regime of Kim Jong-un has made a killing from selling arms and ammunition to the regime of fellow dictator, Bashar Assad.” It goes on to cite claims that a “key supplier” of Syria’s chemical weapons arsenal is the northeast Asian nation.

Another publication, Defense One, headlined: “Syria’s war has been a goldmine for North Korea.”

Both outlets rely heavily on one source, Professor Bruce Bechtol, from Angelo State University, Texas, who is described as a “North Korea expert.”

Bechtol is quoted as saying: “I would be stunned, I would be surprised if the nerve agent used by the Assad regime on April 4 in Khan Sheikhoun [Idlib Province] was not supplied by North Korea.”

In other words, this so-called “expert” doesn’t really know. Professor Bechtol is making a conjecture. Reference to his past research on the subject of North Korea-Syria military links, in 2015, make sweeping assertions about how the two nations have collaborated on developing chemical weapons.

Tellingly, the US “academic” makes a prominent citation of the CIA and other intelligence agencies in his assessment of North Korea and Syria’s military connections.